Meet the guys in "Sisterhood of the Traveling Pants 2" 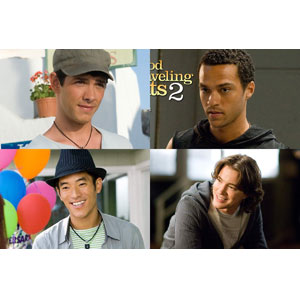 (From upper left corner, clockwise) Michael Rady, Jesse Williams, Tom Wisdom, and Leonardo Nam will be the love team partners of the girls in The Sisterhood of the Traveling Pants 2.

Audiences will recognize two familiar handsome faces: Rady as Lena's (Alexis Bledel) love Kostos, and Nam as Tibby's (Amber Tamblyn) longtime boyfriend Brian McBrian. These young men have also progressed in the ensuing three years on their own trajectories toward adulthood, and Rady and Nam convey that deeper maturity in their roles.

Three years ago, budding artist and shy soul Lena had a near-storybook romance with the charismatic Kostos, a young Greek student she met while visiting her grandparents in Santorini. Though their brief connection was heartfelt, it proved difficult to sustain miles away from the Mediterranean.

Rady believes that anyone who has attempted a long-distance relationship will relate. "It's not easy being an ocean apart from your love. To make things worse, following Lena's decision, Kostos had a romantic tryst with someone from the village and did the honorable thing—as befits his character—by marrying her. It's a tragic blow to Lena when she finds out."

Lena pretends everything is fine and immerses herself in her art classes. Beginning the summer with a figure-drawing class, she gets the chance to prove that she has, in fact, moved on when she makes an impression on her striking model and fellow art student, Leo, a free spirit unlike anyone she has ever met.

Jesse Williams makes his feature film debut as Leo, whom he describes as "confident without arrogance, happy, a guy who is fully at ease in his own skin. Unlike Lena, his uninhibited approach to life also makes him comfortable flowing in and out of relationships in a way that is foreign to her."

Tibby has also been falling in love—though she'd never admit it—with her formerly platonic friend and fellow videophile Brian McBrian, whom we met in the first film. Leonardo Nam, returning as the straightforward and sensitive Brian, points out, "Just as the girls have matured, left high school and are navigating their way in the world, so Brian has grown up. He's not the awkward video-game playing geek we first met. Although they're both freaked out by what's happening, their reactions are different: Brian is focused on working things out, but Tibby's impulse is to shut him out."

Meanwhile, Carmen (America Ferrera) accepts an invitation to work backstage at a theater over the summer because she really has nothing else to do. "But she's surprised at how much she grows there," Ferrera says.

To her amazement, Carmen is cast as the lead in William Shakespeare's A Winter's Tale and discovers a dormant passion for acting. At the same time, she shyly captures the attention of her charming leading man, Ian, played by British actor Tom Wisdom. Ian's genuine affection encourages Carmen to shine on stage.

Opening soon across the Philippines, The Sisterhood of the Traveling Pants 2 will be released worldwide by Warner Bros. Pictures, a Warner Bros. Entertainment Company.