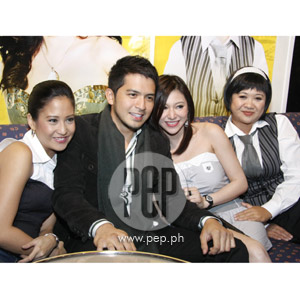 (From left) Jolina Magdangal, Dennis Trillo, Rufa Mae Quinto, and Eugene Domingo seek their destinies in foreign destinations in the GMA Films movie I.T.A.L.Y. (I Trust and Love You).


Each one of us will tread on different paths in the course of our lifetime. Cliché as it is, the choices we make conspicuously shape our destiny. As we embark on these realities, let GMA Films' highly anticipated movie of the year, I.T.A.L.Y. (I Trust and Love You), take you through a romantic odyssey touching the intricacies of life, love and destiny.

Filmed on board Costa Magica, a luxury cruise that travels to the world's most enthralling destinations, I.T.A.L.Y. exposes the adversities and personal sacrifices and the lighter side of the lives of OFWs. It revolves around six people with six different personalities, stories, ambitions and struggles. In a span of their magical voyage for seven days, their lives will crisscross amid unexpected possibilities.

Having a powerhouse cast that battled seasickness in the course of their Roman cruise makes it truly a film worth watching. Leading the pack of Kapuso stars cast in the film is Jolina Magdangal who portrays the role of Des Pinlac, a hopeless romantic who works as a chambermaid at the ship. Finding the right man is her fervent wish but things didn't end up too well for her. Rufa Mae Quinto is Stella Sembrano who practically surrendered her fate at sea. She is the cruise's lounge singer who patiently waits for the perfect man, not unlike her father and past boyfriends who abandoned her. Dennis Trillo plays the role of Paolo Guzman. He joined the cruise to fill up the missing pieces of a woman in his past that keeps haunting him.

Eugene Domingo is Lovely Mercado, a senior housekeeper who believes it is never too late to find true and everlasting love. With two failed attempts to tie the knot, Lovely holds the key in connecting Paolo with the woman in his past. Rhian Ramos portrays Phoebe Villaroso, a brat who lavishly does whatever she wants. Contrary to her rebellious character, she falls for the plain-looking cabin crew while on board the cruise. And lastly, Mark Herras is Nathan Reyes. Orphaned at a young age, he has to work for his family and ends up as a member of the cruise's cabin crew. Coincidentally, he stumbles upon Phoebe and unexpectedly falls in love with her. The bitter pill of their love affair is that they are separated by two different worlds.

I.T.A.L.Y. is another venture of GMA Films, the same movie outfit responsible for Ouija and My Bestfriend's Girlfriend. It is under the direction of Mark Reyes, who has been collaborating with GMA Network Inc. for years now in producing chart-topping telefantasya shows, blockbuster movie hits, and youth-oriented programs.

Moviegoers will certainly enjoy and be enchanted with I.T.A.L.Y. The movie is injected with the perfect emotional tone of romance, drama and humor and encapsulates the essence of life in accordance to one's destiny. Finding love in a world full of uncertainties and second chances, the kind of love everybody wants and needs but rarely finds.

GMA Films proudly brings an awe-inspiring, sentimental yet funny film set in picturesque and scenic locations in three different continents. On September 17, set sail and search for love, laughter and destiny with I.T.A.L.Y.