Christina Applegate stars in "The Rocker" 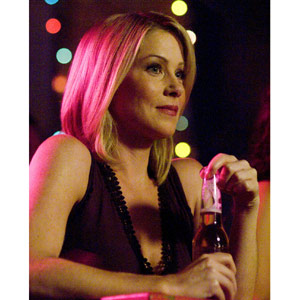 Christina Applegate plays a mother of a 17-year old musician in the movie The Rocker. She thinks that Fish is a bad influence on her son but later on, discovers the good qualities that he possesses.


Christina Applegate stars opposite Rainn Wilson in The Rocker, a hilarious movie about a young mother of a teenage musician.


In this new comedy, there is great music, fascinating characters, an entertaining story, but there is also romance. At first Christina Applegate's character Kim cannot stand the aging rocker who appears to be leading her son and his pals astray. Her 17 year-old son Curtis (Teddy Geiger) has a high school band, A.D.D. After they lost their drummer, they "hired" someone named "Fish" Fishman (Rainn Wilson) as a replacement. Fish was once nearly famous. He was a member of the ‘80s band Vesuvius that became massive global superstars—just after Fish was thrown out.

Now Fish is getting another opportunity to live out his wild rock n' roll fantasies. The problem is, while the other band members are still in their teens, Fish is 40 and as far Kim is concerned, a very bad influence on her son and his band. When A.D.D. becomes so popular they get the chance to go on tour, she insists on joining them. Kim may be a young and very hip mother, but she is also protective. While spending time together, Fish and Kim find that sparks fly.

Christina Applegate started acting when she still a young child, appearing in TV shows and commercials. She made her name in the popular TV series Married with Children when she was just 15. Versatile and talented, she has proven her skills on stage and on the big screen too. She won an Emmy for her role on Friends as well as a Tony nomination for the Broadway show Sweet Charity. Her films include The Sweetest Thing, Surviving Christmas, Anchorman: The Legend of Ron Burgundy, Wonderland, View From the Top, and Don't Tell Mom the Babysitter's Dead. She was nominated for a Golden Globe for her current TV show, Samantha Who.

Q: What kind of woman do you play?

A: I play a single mother, a young mother who has a lot of strength and had to raise her son on her own. At the same time I think there's a sadness to a woman like this who has had her youth taken away from her. She's charming; she's witty. Her style and her taste have remained the same since she was 16. She's a grown up but has a youthful quality to her. She is very close to her son. They are good friends.

Q: Did you relate at all to the character? Your own mother was a young single mom wasn't she?

A: Yes, I definitely related a lot in terms of what my mom went through. I understood what a young single mother experiences. My upbringing was great. It was very creative and I am still close to my mom.


Q: What kind of music are you into—do you like the ‘80s head banging rock music that Vesuvius play in the film?

A: No, that was never anything that I was into at all—contrary to popular belief—because of course as viewers will remember, I played a girl who was into rock music on the TV show Married with Children. Growing up, I was into classic rock. I loved Led Zeppelin. I was a huge Doors fan when I was younger. I also loved Free. I guess I grew up in a household where that's the music I heard, that was what my mom was listening to. I grew up listening to old '70s music and then I got into alternative music like The Red Hot Chili Peppers and Jane's Addiction. And I love The Beatles.


Q: What was it like working with Rainn Wilson?

A: Working with him was such a joy; I am really lucky. That's one of the reasons I wanted to do the movie. He is so talented; he didn't stick to the script. I think Rainn and I have very similar senses of humor. We are both a little dark and we come from the same place comedically. He is great with improv. He is so good that he was always keeping me on my toes.


Q: Can you talk about the overall appeal of The Rocker?

A: We always root for the underdog; this is a great underdog story about second chances. It is really funny, with great characters. We get to make fun of this ridiculous guy and yet at the same time it is about wonderful relationships between Rainn and Kim and Rainn and the band. All the characters have growth and development. Other than Rainn, Teddy Geiger is so talented and he will have a huge appeal for a lot of teenagers. Josh Gad is also very talented. So is Emma.

The Rocker opens very soon in theaters from 20th Century Fox to be distributed by Warner Bros.