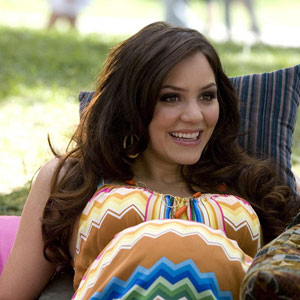 American pop and R&B singer Katharine McPhee will make her debut on the big screen in the comedy film The House Bunny. This Columbia Pictures film will soon open in the Philippines.


Making her motion picture debut in Columbia Pictures' comedy The House Bunny is Katharine McPhee, best known for being the 2006 runner-up in the smash reality singing competition American Idol.

In the film, former Playboy Bunny Shelley (Anna Faris) gets tossed out of the Playboy Mansion, and with nowhere to go, fate delivers her into the lives of a group of socially challenged university girls, who will lose their campus house if they can't attract new members. In order to accomplish their goal, Shelley needs to pull out all her playmate tricks and give them a crash course in the ways of makeup and men.

McPhee plays Harmony, a very pregnant, and very flower child, sorority sister. She is always seeing the best in people and always being shocked by how cruel others can be sometimes. As she prepares to give birth, Harmony is the classic beautiful-on-the-inside type who flowers when Shelley begins her lessons.

For her part, McPhee sees the character a little differently. "She's supposed to be this hippie chick, but I think she's just free spirited, which is definitely a side to my personality," she says.

McPhee couldn't resist the chance to show off her pipes during a karaoke scene in the film. "I knew that the scene couldn't be like it was me singing," she laughs, "but Harmony is a free spirit, willing to try anything, and excited about life, and I think she'd definitely belt out the song to the best of her ability."

McPhee was also thrilled by the chance to sing for the film—a new version of the ‘80s pop anthem "I Know What Boys Like," which plays over the end credits. "I had a great time recording the song," she says, "but to be honest—shooting the movie was even better."

She will soon begin production on Robert Angelo Masciantonio's The Storyteller opposite Wes Bentley.

Her debut album Katharine McPhee on RCA/19 Recordings reached number 2 on the Billboard 200. Her first single "Somewhere Over the Rainbow"/"My Destiny" debuted at No. 2 on Billboard's Hot Singles Sales chart. In 2007, McPhee garnered a Young Hollywood Award for "Best Break-Out Female Vocalist."

Opening soon across the Philippines, The House Bunny is distributed by Columbia Pictures, local office of Sony Pictures Releasing International.