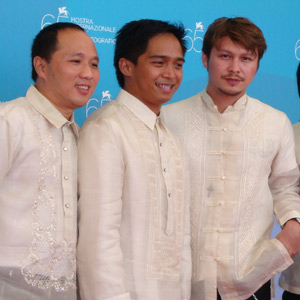 
The movie hailed as the Best Film of Cinemalaya 2008 is about a homosexual TV producer named Jay (Baron) who investigates the death of a teacher in Bacolor, Pampanga. The controversial star won as Best Actor during this year's Cinemalaya.

According to Ferdy Lapuz of Ignatius Films Canada, Jay ran for 96 minutes and was given "a roar of approval and applause by the audience." After the screening, the film delegates were led to a room wherein Paolo Bertolin headed the press conference. Mr. Bertolin is crucial in allowing Filipino films to penetrate the Venice IFF starting with Lav Diaz's Death in the Land of the Encantos (2007), which won the Golden Lion Special Mention award in the Horizons (Orizzonti) Documentary section last year.


The 30-minute press conference was followed by a photo call for the international press then followed by a TV and a radio interview for Direk Francis and Baron.

Since Jay is Direk Francis's debut film, this makes him eligible to win the Luigi de Laurentiis award for Best First Feature—which comes with a cash prize of $100,000 and 40,000 Euros voucher to be spent on film stock granted by Kodak, and a Golden Lion of the Future trophy.

Another Filipino entry, Lav Diaz's Melancholia will be the closing film of the Orizzonti on September 6. Direk Lav Diaz, actors Perry Dizon and Angeli Bayani, as well as production supervisor Kristine Kintana presented the film during the 65th edition of the Venice IFF.

Jay will be competing at the Bangkok International Film Festival next month. It is also an official selection at Vancouver, Pusan and London film festivals. Ignatius Films Canada is representing Jay.