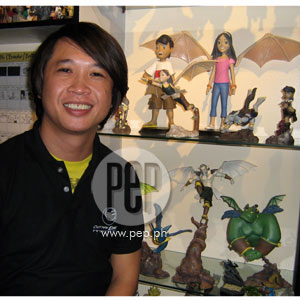 Director Robert Quilao poses in front of the clay resin figurines of the characters in Dayo (Wanderer). The story of the animated film revolves around a young boy who enters the fantasy world of Elementalia through the help of a manananggal.


For the first time in the history of the Metro Manila Film Festival, a full-length animated film was chosen as one the entries competing in the annual filmfest. The fantasy movie Dayo will feature the voices of Nash Aguas, Katrina "Hopia" Legaspi, Johnny Delgado, Laurice Guillen, Michael V, Pokwang, Nova Villa, Noel Trinidad, and Peque Gallaga, among others.

Adding star power to the animated film is Lea Salonga, who will record the theme song "Lipad" along with the Filharmonika orchestra to be conducted by her brother Gerard.

Directed by Robert Quilao, Dayo (Wanderer) will open in cinemas on December 25 along with the seven other official entries to the 34th edition of the MMFF.

Jessie Lasaten heads Cutting Edge Productions, the local animators behind Dayo, as its chief executive officer. He also serves as the executive producer and musical scorer of Dayo. Through the production of Dayo, he challenges his pool of creative minds and animators to compete on a regional scale by way of content creation. Mr. Lasaten is a multi-awarded music composer and arranger for renowned films such as Anak and Bata, Bata, Paano Ka Ginawa.

"The Philippines has been outsourcing animation and digital works for around two decades now. It's about time that we recognize our very own animators by creating original content that is proudly Pinoy," says Mr. Lasaten.

For this reason, he and other investors decided to produce Dayo, a full-length animated feature that combines paperless 2D and 3D technologies.

Members of the press recently toured the animation studio of Cutting Edge Productions, the local animators behind Dayo. During the visit, PEP (Philippine Entertainment Portal) was able to talk with Ric Camaligan, one of the members of the MMFF screening committee that chose this year's entries.

"As far as children are concerned, ito lang ang movie na pambata sa film festival. We initially had some apprehensions because of what happened to Urduja [another animated film that did not do very well at the box office], we analyzed it and we sensed that the people behind Dayo should learn from why Urduja didn't make it."

Urduja is the full-length animation that was shown in the Philippines last June. It took 11 years for Mr. Tony Tuviera of APT Entertainment Inc. to bring life to the Tawilisi princess who fell in love with a Chinese pirate during the 13th century.

When asked what the animators learned about the experience of Urduja, they point out the various factors that hindered Urduja from making a killing in the box office.

Direk Robert adds his own observation: "We're happy for Urduja because at least now, we have content. The thrust is really about content-creation now and it's really good stuff. We learned a lot from Urduja, maraming factors that contributed to that."

According to Direk Robert, they conceptualized this film specifically for the Metro Manila Film Festival.

"Full production started October of last year but pre-production started six months before that. So essentially, for the entire film it has been a year and a half, which is actually a big leap already ‘cause feature films used to take two to three years," narrates the director, who used to work for TV stations ABS-CBN, ABC-5 and MTV Philippines. He graduated with a degree in advertising from the University of Santo Tomas.

"We did a story conference for Dayo in Tagaytay for three days in April 2007. We had a structure and then we laid down all the details. This is my first feature film but I am directing a show for MTV called Campus Crashers."

As early as now, the creators of Dayo have been receiving inquiries from Mexico and Russia.

Their process, which they call "tra-digital animation," is said to be the same process used in creating the popular animated film The Simpsons.

"It's still similar to the traditional way of animating except that it is totally paperless," explains Mr. Quilao. "All the steps are still pretty much the same but they translated it to a digital environment. We're the only studio right now with this kind of technology called tra-digital animation."

Producers say that the cost of the film will reach $1.2 million (around P54 million). Right now, they are running on four shifts just to finish Dayo in time for the MMFF. By November, they plan to tour schools and show snippets of the movie to youngsters in order to entice them to consider taking courses in animation. They will also show a preview of the film during the 2nd Animahenasyon festival slated for November 12-16, 2008.