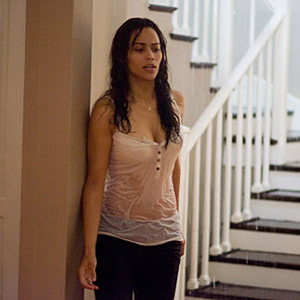 Paula Patton (in photo) acts opposite Kiefer Sutherland in the disturbing thriller Mirrors, which will open in the Philippines on October 1, 2008.


Emerging talent Paula Patton stars opposite Kiefer Sutherland in the disturbing thriller Mirrors based on the Korean horror film Into The Mirrors. Directed by today's horror expert Alexandre Aja (Hills Have Eyes), the movie reflects the troubled and terrifying life of an ex-cop who must save his family from an unspeakable evil that is using mirrors as a gateway into their home.


Ben Carson (Sutherland) has seen better days. It's been nearly a year since the volatile detective was suspended from the NYPD for fatally shooting another undercover officer, an accident that not only cost him his job, but fueled the alcoholism and anger that has alienated his wife Amy (Patton) and kids and left him crashing on his sister's couch in Queens.

But a much deadlier threat looms, trapped within the mirrors and reflective surfaces that pervade their everyday life. As Carson investigates the mysterious disappearance of a Mayflower security guard and its possible connection to his ghastly visions, he realizes that a malevolent, otherworldly force is using reflections as a gateway to terrorize him and his family.

If he has any hope of saving his wife and children from a horrifying death, Carson must somehow uncover the truth behind the mirrors-and convince Amy to help him battle the greatest evil he has ever faced.


"She thinks he's gone off his rocker," says Patton, who started reading the movie's script one evening...and had to wait until morning to finish it. ("That was a good sign," she adds.) "Amy is very logical, very left-brained and scientific-minded, so the idea of ghosts or otherworldly forces is not something she believes in. She has also seen a lot of gruesome and horrible things in her line of work, so she doesn't scare easily. Their family is crumbling," Patton says, "and Ben feels more alone than ever because no one believes him."


"There is a great balance between their two storylines," notes Aja. "At the beginning of the film, Amy is the strong one, keeping what's left of their family together while Ben is at rock bottom. As Ben finds the strength to confront himself, he and Amy must fight on separate fronts for the same purpose-saving the kids, themselves, and most important, their family."


Mirrors opens October 1 in theaters nationwide from 20th Century Fox to be distributed by Warner Bros.