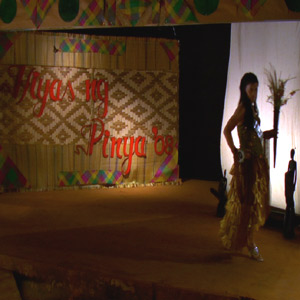 Charliebebs Gohetia's The Thank You Girls is one of the films competing in the Dragons & Tigers Award for Young Cinema of the 2008 Vancouver International Film Festival.


A Filipino film about homosexual beauty pageant contestants has been nominated for the Dragons & Tigers Award for Young Cinema in the Vancouver International Film Festival. Charliebebs Gohetia's The Thank You Girls will compete for the $10,000 cash prize in the 27th annual VIFF, which will be held from September 25 to October 10, 2008. The award will be handed out in a ceremony on October 2.

Aside from that, the Vancouver IFF will feature other Filipino films in the Dragons & Tigers series. These are the Cinema One 2007 entry Altar, Ronaldo Bertubin's Blink, the Cinemalaya 2008 entry Jay, Brillante Mendoza's Serbis, and Years When I Was a Child Outside.


Altar is topbilled by Zanjoe Marudo while Jay is topbilled by Baron Geisler. Starring Jojit Lorenzo and Sherwin Ordoñez, Kurap is about greed and corruption among small-time criminals in the streets of Manila. Serbis has a powerhouse cast composed of Coco Martin, Gina Pareño, Jaclyn Jose, and Julio Diaz. Years When I Was a Child Outside has the alternative title Taon noong ako'y anak sa labas.

The VIFF is expected to bring together films from 60 countries worldwide. It is one of the five largest film festivals in North America. The 27th edition will feature a total of 47 features, 5 mid-length films and 23 shorts in the section called The Dragons & Tigers: The Cinemas of East Asia program. The series, which started in 1985, will feature 27 International premieres, 18 North American premieres, and one Canadian premiere.

Here is the list of Filipino films included in the Dragons & Tigers series (with descriptions provided by the VIFF ‘08):

Rico Ilarde's prizewinning horror movie offers a distinctively Filipino take on the haunted house with a portal to hell in the basement as two jobless men find work renovating a strange house in the countryside. Strong genre thrills and very fine visuals.

Ronaldo Bertubin's feisty indie feature looks and sounds like a thriller, but it's actually a fresh (and, uh, homo-erotic) take on the Quiapo slum melodrama as developed by the likes of Lino Brocka. Small-time crook Ambet wants to pay for an operation to cure his sister's glaucoma; should he trust photojournalist Marlon, who wants to use him to expose the local criminal rackets?

Today, on Dearly Departed Ones, a mother in Pampanga whose house was half-buried by the eruption of Mount Pinatubo turns on the TV news and discovers that her elder son, a schoolteacher in Manila, has been stabbed to death in a gay sex-crime. Francis Pasion's prizewinning debut feature is both a lacerating satire of the ethics of "reality TV" and a wry commentary on the west's predilection for certain images of the "Third World."

Brillante Mendoza follows last year's Foster Child and Slingshot with the story of an epically dysfunctional family. They operate a decrepit cinema (called "Family"), which attracts few but men looking for male and transvestite hookers, but conjure up enough melodrama in their own relationships to fill a dozen of the movies they screen.

Charliebebs Gohetia, the editor of Brillante Mendoza's films, turns director with this deeply Filipino variation on Priscilla, Queen of the Desert. A gaggle of drag queens and their domestic entourage travel around the sticks, joining "beauty pageants" in which they impersonate the likes of Miss Ecuador. There's laughter and tears on stage, but how do their off-stage realities match up?

Years When I Was a Child Outside (John Torres) - Philippines

The new feature by D&T Award-winner John Torres represents a very personal coming-to-terms with his father, a publisher of self-help textbooks, who left the family and started another without telling anyone. It's as essayistic and discursive as Todo, Todo, Teros, but anchored in very precise feelings of love, loss and resentment.