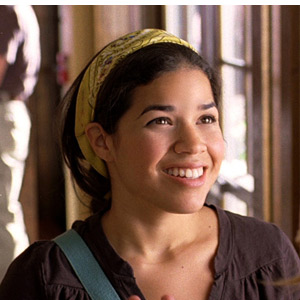 America Ferrera (in photo) reprises her character, Carmen, in The Sisterhood of the Traveling Pants 2. This touching drama from Warner Bros. will premiere in the Philippines on September 24, 2008.


Her portrayal of the title character in TV's Ugly Betty has earned her numerous honors, including an Emmy Award, a Golden Globe Award, and a Screen Actors Guild Award. Now, America Ferrera returns to the film that started it all as she reprises her character, Carmen, in Warner Bros.' touching drama, The Sisterhood of the Traveling Pants 2.

Based on Ann Brashares' best-selling series of novels about four young women who share an unbreakable bond through the unpredictable events of their lives, the sequel catches up with Tibby (Amber Tamblyn), Carmen, Bridget (Blake Lively) and Lena (Alexis Bledel) in the months following their first year of college.

Feeling displaced at home with her mother expecting a new baby, and disappointed that her friends opted to spend the summer away, Carmen accepts a chance invitation to work backstage at a theater festival in Vermont. There, she surprisingly finds herself thrust into the spotlight for the very first time and simultaneously becomes the focus of the play's handsome young leading man.

"Sometimes you need to see what you're capable of accomplishing on your own," says Ferrera. "It's time for them to step away from the safety net and find out who they are individually before they can truly appreciate what they have together. It's scary, but a tremendously exciting prospect."

After a year at Yale, Carmen has kept pace with her classes but finds her personal life less manageable. Still not sure what she wants to do with her future, she returns to Bethesda with high hopes of reuniting with the sisterhood and is crushed to learn they've all made other plans for the summer. Her mother, played again by Rachel Ticotin, has recently remarried and is now simultaneously preparing for the birth of a baby and moving to a new house, her happiness adding poignantly to Carmen's sense of displacement and disconnection.

"Carmen accepts an invitation to work backstage at a theater in Vermont over the summer because she really has nothing else to do," says Ferrera. "But she's surprised at how much she grows there."

To her amazement, and with some trepidation, Carmen is cast as the lead in Shakespeare's A Winter's Tale and discovers a dormant passion for acting. At the same time, she shyly captures the attention of her charming leading man, Ian, played by British actor Tom Wisdom.

Ian's genuine affection encourages Carmen to shine on stage. But it's the demanding nature of her mercurial director that will test her confidence and conviction like never before and, consequently, lead Carmen to consider whether this accidental turn of events is just a pleasant diversion or possibly a bold new direction for her life.

Opening across the Philippines on September 24, The Sisterhood of the Traveling Pants 2 will be released worldwide by Warner Bros. Pictures, a Warner Bros. Entertainment Company.