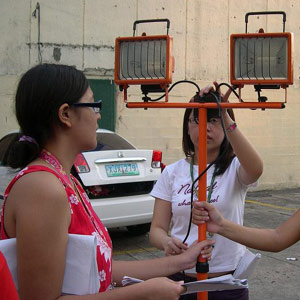 Young filmmakers from the Angelicum College, Ateneo de Manila University, Miriam College, St. Paul University (in photo), Trinity University of Asia, and University of the Philippines-Diliman will compete in the first Quezon City Independent Film Festival. The new film fest will have its opening ceremonies tomorrow, September 10, at the Gateway Mall in Cubao, Quezon City.


The Quezon City Film Development Commission (QCFDC) aims to promote and support the development and growth of the local film industry as a medium for the upliftment of aesthetics, cultural and social values and the better understanding and appreciation of the Filipino identity. To meet these goals, the QCFDC came up with a film festival for the students called the "1st Quezon City Independent Film Festival," which will be from September 10 to 17, to be held at the Cinema 4 of Gateway Mall in Cubao.

The event is a showcase of short films (animation, experimental, narrative, and documentary) made and produced by our young filmmakers from Quezon City universities and colleges. According to Jerico Antonio, executive director of this new film fest, 27 short films from six schools participated in this edition. All of the entries did not exceed more than 20 minutes as per requirement.


The schools that will be competing for the best short film in the four categories are University of the Philippines Diliman, Ateneo de Manila University, Miriam College, St. Paul University of Quezon City (formerly known as St. Paul College), Trinity University of Asia, and Angelicum College.

Here is the list of entries from each school:

Tickets are available at the Gateway Mall Cineplex and are priced at P80. For the complete schedule of screenings, please visit QCFDC.multiply.com