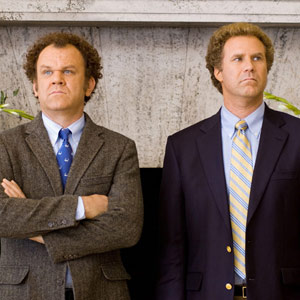 John Reilly (left) and Will Ferrell (right) churn out laughs for Columbia Pictures' new adult comedy Step Brothers. It will be screened at Glorietta 4 and Greenbelt 3 in Makati City starting September 17.


From the creators of Knocked Up and 40-Year-Old Virgin comes Columbia Pictures' new adult comedy Step Brothers starring Will Ferrell and John Reilly. The irreverent comedy that has been rated R-18 Without Cuts by the MTRCB will be shown exclusively at Ayala Malls Cinemas (Glorietta 4 & Greenbelt 3) starting September 17.

In Step Brothers, Ferrell plays Brennan Huff, a sporadically employed thirty-nine-year-old who lives with his mother, Nancy (Mary Steenburgen). Reilly plays Dale Doback, a terminally unemployed forty-year-old who lives with his father, Robert (Richard Jenkins). When Robert and Nancy marry and move in together, Brennan and Dale are forced to live with each other as step brothers. As their narcissism and downright laziness threaten to tear the "new" family apart, these two middle-aged, immature, overgrown boys will orchestrate an insane, elaborate plan to bring their parents back together. To pull it off, they must form an unlikely bond that maybe, just maybe, will finally get them out of the house.

Ferrell sums up the central characters by describing two grown men in a state of arrested development. "Dale and Brennan never outgrew their adolescent ideas about what's cool, how they'd spend their time when they grew up, what they found entertaining. It was a lot of fun to explore that, thinking, ‘What if you actually became, at 40, the guy you thought you'd be when you were 13?'"

Producer Judd Apatow poses a different question, "What do you do if your kids are a mess? Richard Jenkins and Mary Steenburgen play the parents, and what's funny about their fights in the movie is that they really just don't know what to do," Apatow says. "Interestingly, it's a pretty common problem: how do you get your kids out of the house?"

"Brennan and Dale are very leery of each other. Neither of them likes the new situation at all," Ferrell says. "All that changes when Dale meets Brennan's younger brother Derek, who comes to dinner one night with his family. Derek is the complete opposite of Brennan. He's successful, handsome, and has everything going for him. He's also tormented Brennan his entire life. Dale comes to Brennan's defense by sucker-punching Derek, and from that moment on, Dale and Brennan are best friends."

"John and Will have incredible chemistry," says Apatow. "I don't know where it comes from, but they're really fun to watch together and there's something about their comedic styles that really balance each other out. They're like a great comedy team."