Fall in love with "Nights in Rodanthe" 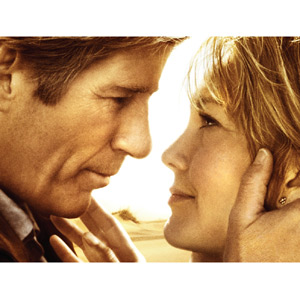 Richard Gere and Diane Lane meet in Rodanthe, North Carolina as two people reflecting on the paths that they will take (or had taken) in life. Watch the silver screen version of Nicholas Sparks's best-selling novel Nights in Rodanthe coming soon in the Philippines.


Richard Gere and Diane Lane reunite on screen in Warner Bros.' romantic drama Nights in Rodanthe, based on the Nicholas Sparks best-selling novel about two people who discover there is always a second chance to find the love of your life. James Franco is also cast in this film.


In the movie Nights in Rodanthe, Adrienne (Lane), a woman still reeling from her husband's betrayal and struggling to rebuild a life without him, has just learned that he wants to come home. Torn by conflicting feelings, she welcomes the chance for escape when an old friend asks her to manage her inn in Rodanthe for a weekend. There, on a remote spot along the Outer Banks of North Carolina, Adrienne hopes to find the tranquility she needs to rethink her life.


It's the off-season and the inn would be shuttered but for the unlikely arrival of its solitary guest, Paul (Gere), a doctor from the city. A man who long ago sacrificed his family to his career, Paul has come to Rodanthe to fulfill a difficult obligation and to face his own crisis of conscience.

They are two strangers sharing the same roof. But as a major storm closes in, they turn to each other for comfort, and set in motion a life-changing romance that will resonate through the rest of their lives.


"This is a story about people discovering there is an Act Two in their lives," says director George Wolfe. "People go through a good portion of their lives making decisions and choices that are either good or bad, right or wrong, and they often feel that the state to which it brings them is permanent," he says. "It's as if they reach a certain point and say, ‘Okay, this is my life; this is what I made of it and this is all I get.'"


"But what happens as we embark upon the second half of our lives?" asks producer Denise Di Novi. "Do we find love? Do we find our soul mates if we haven't found them yet, or if we found them and lost them? People are always discovering new interests and new facets of themselves. The idea of finding a soul mate in the middle of the journey is not so unusual; sometimes it takes that long and sometimes it happens when you least expect it. The dream of finding true love doesn't end at 25. That's the message of Nights in Rodanthe and I believe many people can relate to that and will be inspired by it."

"It's a love story for adults," offers Richard Gere. "These are people who had lives before they met and aren't looking for a relationship to define them." Still, this is a relationship that will change how they define themselves and that, in turn, will alter the course of their lives well beyond the time they spend together.


Not only does Nights in Rodanthe suggest that it's never too late to find that one true connection, it is likewise never too late to regain the self you lost along the way, while living the life you thought you wanted--or that others expected of you.


Above all, it is a sweeping love story in the Nicholas Sparks tradition.


Opening soon across the Philippines, Nights in Rodanthe will be distributed worldwide by Warner Bros. Pictures, a Warner Bros. Entertainment Company.