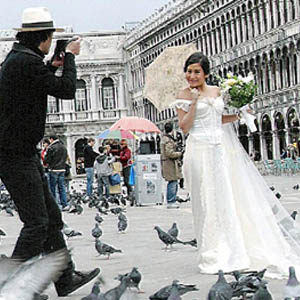 Jolina Magdangal delivers another credible performance as a hopeless romantic in search of her ideal man in I.T.A.L.Y. (I Trust And Love You). This comedy from GMA Films will open on Wednesday, September 17, in theaters nationwide.

"Love is a journey." So goes the tagline of GMA Films' I.T.A.L.Y. (I Trust And Love You), which deals with finding true love across three continents, five countries, and 13 cities.

The story begins with Destiny (Jolina Magdangal), a family breadwinner who decides to try her luck as a cabin girl in the luxury liner Costa Magica. She has three brothers (Aljur Abrenica, Edgar Allan Guzman, and Joaquin Valdez), and her father (Pen Medina) is confined to a wheelchair. Her mother has already passed away.

A hopeless romantic, Destiny consults a fake fortune-teller, Charing (Chariz Solomon), who tells her that the man of her dreams possesses the following signs: he always wears white, has the initials P.I.G., and his buttocks bear his birth mark.

Aboard Costa Magica, Destiny meets other characters that make her stay there more colorful for they all have their own stories to tell: Lovely (Eugene Domingo), an unmarried woman who seems to have lost her chance in love after missing her own wedding; Paolo (Dennis Trillo), a mysterious guest who lives in the past; Nathan (Mark Herras), a young cabin boy who wants to find direction in his life; Phoebe (Rhian Ramos), a guest on the ship who feels neglected by her mother (Ida Henares); and Stella (Rufa Mae Quinto), the lounge singer who is unlucky in love.

Destiny thinks that she has found the man of her dreams in Paolo since he possesses the signs—except for one. But it turns out that Stella also has her eyes set on Paolo. So, a tug-of-war ensues between Destiny and Stella for the attention and love of Paolo.

Paolo, on the other hand, ignores the two most of the time since he's madly in love with his Italian girlfriend, Sofia (Andrea de Lugo).

Nathan and Phoebe also have a rich girl-poor boy love story aboard the ship. Lovely develops a romance with no less than the captain of the ship.

Some of them find true love aboard the ship while others discover it elsewhere.

We also fell in love but in a different way. The tourist spots shown in the movie are breathtaking! The movie tags us along as the characters visit the most romantic places in the world—Venice, Rome, Napoli, Genoa, Barcelona, Tunisia, Palma de Mallorca, and other spots.

But more than the love stories and postcard locations, the movie's strength lie in its comedy scenes. All the characters have their comedic moments, but Eugene Domingo and Rufa Mae Quinto delivered the best punch lines.

Unlike other movies about Overseas Filipino Workers (OFWs), which focus more on the hardships and trials they experience in their jobs, I.T.A.L.Y. takes a different route by showing the lighter side of working abroad.

This is not to say that the movie lacks touching moments. But these are presented in a manner that makes viewers will still feel okay afterwards, since director Mark Reyes injected humor into these scenes. We particularly liked Destiny's phone conversation with her father, wherein they're both crying but still manage to crack jokes in the end. The scene is made even funnier when Lovely silently listens to their conversation and ends up crying herself.

Entertainment is really the movie's main purpose—and it certainly delivered.

Yet if there's one complaint we have about the movie, it's that there could have been more scenes showing the characters actually doing their jobs and interacting with other crew members, so that we could get a better feel of how it is to work in a luxury liner. But since the movie's focus is the love story of each character, that aspect might have been sacrificed.

Also, some shots are so dark that you cannot see the facial reactions of the characters. The camera also tends to overdo close-up shots of the stars, which we find a little bit distracting.

Not much is required of the cast since their roles have no major conflict, except for Dennis's character. But all of them delivered and contributed to make the movie worth watching.

Jolina is very comfortable with her role and she goes through it with utmost ease. Rufa Mae shows her usual flair for comedy, quoting verses from songs as her dialogue and her one-of-a-kind-song number. Dennis had his dramatic highlights that showcased his sensibility as an actor. Mark and Rhian proved that they are competent young actors as well; their team-up is surprisingly cute.

But Eugene almost stole the movie with her effortless comic timing. It's hard to mention one particular scene where she stands out. Her presence is greatly felt in every scene where she appears—with or without dialogue—and all of them are hilarious. Her facial expressions alone can make anyone laugh out loud. This comedienne is simply a genius, as proven again by her performance in I.T.A.L.Y.

I.T.A.L.Y. is a simple movie without any pretension and that's what makes it entertaining. It is not intended to win awards but it will surely win the hearts of moviegoers.