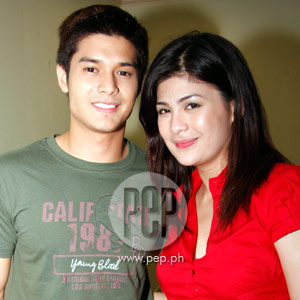 The director spoke with PEP (Philippine Entertainment Portal) during a shoot break last September 9 at the old Regal office in Valencia St., San Juan, and excitedly shared how the giant film outfit is pulling all the stops to make this latest trilogy project different from the previous ones.


"Regal really wanted to come up with something special this year. Basically me and direk Topel Lee are coming back; we started in 2006 so ito naman ‘yong third namin in a row. Ito rin ‘yong parang grand slam rin naman namin, so it means a lot to be included in this project," said Direk Mike, who is in charge of episodes one and three, while Topel will direct the second episode, titled "Class Picture."

REINVENTING THE ASWANG. Direk Mike generously gave us a background of the last episode, "Emergency."

The situation makes the characters of Roxanne and JC face the situation and save the lives of the patients and other innocent people inside the hospital. Playing the lead roles of aswang are Mylene Dizon and Wendell Ramos.

The aswang has been played out many times before on local television, in movies and in literature. This time, Direk Mike wants to present the character without the usual stereotypes to show a different facet of the feared creature.

"It's almost a modernist approach sa mga aswang. They're not just the plain monsters who can't speak. They have their own language, they have their own culture, tapos may relationships din sila. May family rin sila, parang in the way na iniba na ‘yong approach ng mga vampires, for example, sa mga modern Hollywood movies. We wanted to do that kind of approach, parang modern twist sa aswang naman dito."

MIXED BAG OF TALENTS. Being an independent company, Regal Entertainment is in that enviable position by which they can invite and gather talents coming from the two rival stations—ABS-CBN and GMA-7. Direk Mike is obviously pleased with his rare privilege of directing a variety of talents without having to think of any network alliances. But it still takes real effort, particularly in the beginning, to make everyone feel at ease in each other's company.


When asked if it's easy to mix Kapamilya and Kapuso talents under one project, the director admitted casually, "Not really. Sometimes ‘pag may project and ‘yong mga artista mo galing sa dalawang network, it becomes a little complicated because they don't know each other, so merong mga getting to know you portion pa ‘yan.

"Pero in this particular project kahit na magkaibang network sila they basically know each other from past projects. You know, they've met already before or they worked together before, so hindi naging mahirap this time around. It was very, very smooth, nung nagsimula kami, story con pa lang, parang barkada na," describes Direk Mike.