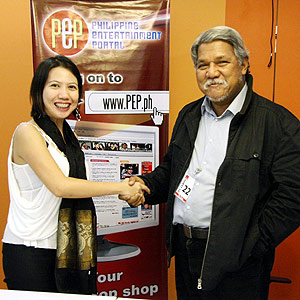 
It has been a decade since the Bulol was first associated with excellence in filmmaking, ten years since the deity whose presence ensures good harvest became the icon for the dream of presenting the best of Filipino films to world cinema audiences and of world cinema to Filipino audiences. This October, as the Cinemanila International Film Festival marks its tenth anniversary, the time has come for that decade-old dream to give way to another.

Dekada Cinemanila will run from October 16-29, 2008 at Gateway Cineplex 10, 4th floor of Gateway Mall, Araneta Center, Quezon City. P1 million in prizes will be awarded to the best in local and international cinema. The 10th Cinemanila International Film Festival is presented by the Independent Cinema Association of the Philippines (ICAP), in cooperation with the Araneta Center, National Commission for Culture and the Arts (NCCA) and the Film Development Council of the Philippines (FDCP).

Last September 10, PEP (Philippine Entertainment Portal) sealed a partnership with Cinemanila for its tenth anniversary. This makes PEP one of the media partners of Dekada Cinemanila.


Since its inception in 1999, Cinemanila has become the launching pad for the new breed of Filipino filmmakers. Past winners like John Torres, Lav Diaz, and Raya Martin went on to create waves in both the local and international arenas. Cinemanila has also been at the forefront in recent developments in local cinema. Most notable of which is the 1st Boracay Co-Production Meeting. Together with the Hubert Bals Fund of Rotterdam IFF, Cinemanila has initiated the first international platform in the Philippines dedicated to awarding partial grants to the most promising filmmakers from all over Southeast Asia.

Many prominent figures have also graced the festival's annual celebration, infusing Cinemanila with a dose of prominence and credibility. Famed cinematographer Chris Doyle, Hollywood stars Tia Carrere and Lou Diamond Phillips, director Fernando Meirelles, Pusan IFF founder Kim Dong Ho, and internationally acclaimed Iranian filmmaker Jafar Panahi are some of the luminaries who have contributed their shine to the festival. Esteemed representatives from foreign film festivals were likewise present such as Olivier Pere from Cannes's Director's Fortnight and Wieland Speck of the Berlin IFF.

Today, Cinemanila can firmly stake claim to being the country's premiere international film festival. No more wishing for Cinemanila to bridge the gap between the Philippines and what world cinema has to offer. This dream may have taken almost a decade to be realized but it was a journey well worth it. Now as another edition approaches, Cinemanila welcomes another set of challenges. It has also set its sight on another dream, to put the Philippines back on the world cinema map. And just like it has done for the past ten years, the Bulol looks on, expectant of another decade filled bountifully with excellent Filipino films.