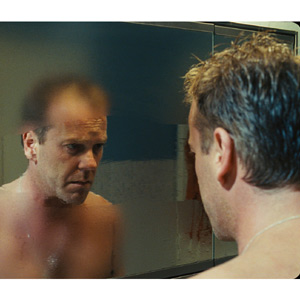 This haunting movie about mirrors and the secrets they contain will be screened in the Philippines starting October 1, 2008. Kiefer Sutherland (in photo) will be paired with Paula Patton in Mirrors.


Emmy and Golden Globe award winner Kiefer Sutherland (24's Jack Bauer) brings his trademark intensity in the upcoming horror film Mirrors as an NYPD police officer suspended from his job due to the accidental shooting of his partner.


Directed by The Hills Have Eyes director Alexandre Aja, Mirrors reflects the terrifying story of troubled ex-cop, Ben Carson (Sutherland) who must save his family from an unspeakable evil that is using mirrors as a gateway into their home. Desperate to pull his life together and reconnect with his family, Carson takes a job as a night watchman at the burned-out ruins of the Mayflower department store. As Carson patrols the eerie, charred remains of the store, he begins to notice something sinister about the ornate mirrors that adorn the Mayflower walls. Reflected in the gigantic shimmering glass are horrific images that stun him.


Kiefer Sutherland, despite his starring role in the movie, admits in the following Q&A that he is not fond of mirrors in real life.

Q: Why did you agree to do this film?

A: "It was the film's hybrid of well-crafted horror and genuine family drama that spoke to me. Horror is a genre that has always intrigued me, but what attracted me to this story is that it deals with a family that is desperately trying to figure out how to come back together. It's about second chances. When things are at their worst, he becomes his best. And that really appealed to me."


Q: What was your initial impression of [director]Aja?

A: "Based on that brief meeting with Alex, I had a real strong sense in that meeting that we were going to do something special together. I'm a gambler. I like to play cards, I'll bet on which dog will hit the corner first, and I had faith. I feel very lucky that I was right."


Q: As an actor, are you fond of looking at mirrors?

A: "I have one in my bathroom and I think I have one in my closet just to make sure I've got the right socks on, but outside of that, I don't like looking at myself very much. It's very odd to be looking at yourself all the time while you're working. That was a very interesting aspect of making this film."


Q: Are you into watching horror movies?

A: "Scary films are very hard for me to watch. When I took my daughter to see Finding Nemo and when the shark comes in the boat, my popcorn went in the air. My daughter was ten at the time and she laughed at me for it."

Q: Will you be able to watch the movie without being frightened?

A: "Hopefully, I'll be smart enough not to take popcorn with me, but if I do, it's gonna go in the air. (laughs) We've created something truly frightening that will stay with you, that will touch a fear inside you that is real, and we've blended it with this family drama that is so important to me--the story of a man who is looking for a second chance. By bringing these two genres together, I think we've given this film a depth that not many horror films have."


Sutherland who stars and serves as executive producer of Mirrors has won an Emmy, a Golden Globe and a SAG Award for his searing performance as Agent Jack Bauer on the hit FOX TV drama 24. He has also received an Emmy for Outstanding Drama Series as co-executive producer of the show.


In his prolific film career, Sutherland most recently appeared opposite Michael Douglas and Kim Basinger in The Sentinel in 2006 and, in 2004, he co-starred with Angelina Jolie and Ethan Hawke in the thriller Taking Lives. That same year he also narrated NASCAR - The IMAX Experience.


Sutherland's extensive film credits also include Phone Booth, To End All Wars, Dark City, Truth or Consequences, N.M. (which he also directed), Eye for an Eye, A Time to Kill, The Three Musketeers, A Few Good Men, The Vanishing, The Lost Boys, Young Guns, Young Guns 2, At Close Range, Bright Lights, Big City, Promised Land, Flashback, Chicago Joe and the Showgirl, Flatliners, 1969 and Stand By Me.


Mirrors opens October 1 in Metro Manila, Cebu and Iloilo theaters from 20th Century Fox to be distributed by Warner Bros.