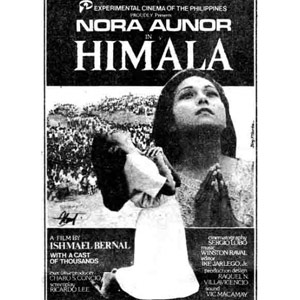 Himala, the 1982 film starring Nora Aunor and directed by the late Ishmael Bernal, is the only Filipino film included in the Best Asian Films of all Time chosen by CNN UK (United Kingdom).


Twenty-six years after it was shown in the Philippines, Nora Aunor's Himala is once again in the spotlight. The 1982 Ishmael Bernal film about a faith healer is the only Filipino film that entered the Best Asian Films of all Time chosen by CNN UK (United Kingdom).


The writer of this piece, Mairi Mackay, points out that Asia is home to 4 billion people in 70 countries. As such, it responsible for half of the world's film output.


The Ishmael Bernal movie is cited for having "austere camera work, haunting score and accomplished performances sensitively portray the harsh social and cultural conditions that people in the third world endure."


In Himala (which translates to Miracle), Nora Aunor portrayed Elsa, a simple barrio lass who believes that she has seen apparitions of the Virgin Mary--allowing her to go on a healing crusade in her small town. Locally, Himala won nine of 11 awards given at the 1982 Metro Manila Filmfest including Best Story/Screenplay, Best Picture, Best Actress, Best Supporting Actor, Best Supporting Actress, Best Editing, Best Cinematography, and Best Production Design. Written by Ricky Lee, this dramatic film also won the Bronze Hugo Award during the 19th edition of the Chicago Film Festival.

Mother India (1957) was nominated for the Best Foreign Language Film of the Academy Awards. Others were shortlisted for the Cannes Film Fest such as In The Mood for Love (2000).


Some of the films chosen proved to have a major influence on Hollywood films. Japan's 1998 film Shall We Dansu? is the basis of the 2004 Hollywood flick starring Jennifer Lopez and Richard Gere. A Touch of Zen (1969), a kung fu movie from Hong Kong/Taiwan, had a massive influence on Ang Lee's Crouching Tiger Hidden Dragon starring Chow Yun Fat and Michelle Yeoh.