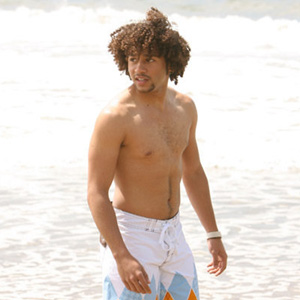 
Last July, teen actor Corbin Bleu wrapped his final scene for Walt Disney Pictures' High School Musical 3: Senior Year. It was a duet with his buddy Zac Efron for the big musical number "The Boys Are Back."


"We finally get to do a duet together," says Bleu, 19. "It's in this junkyard where our characters spent so much of our childhood pretending to be pirates and ninjas. It's a whole fantasy of us being kids again."

The scene is a fitting farewell for Bleu and Efron, who grew up together on screen as Wildcats teammates Chad Danforth and Troy Bolton, respectively, in the first two High School Musical movies. "This has been such a huge part of my life," Bleu says. "For this to be the last installment for us is pretty surreal."

For the flashback scenes, child actors were cast to play young Chad and Troy—with the junior Chad donning a wig resembling Bleu's trademark locks. Bleu realizes how strongly identified he is with that killer 'do and says he would consider cutting it off only for a strong movie role. "I don't want to cut it just to create shock," he says.

The junkyard shoot left Bleu with a few unintentional souvenirs. "I was a mess afterward," he says, lifting his sleeve to show his scars. "Plenty of little bumps and bruises. But, hey, now I have my war marks."

Bleu grew up in Brooklyn, N.Y., and has three kid sisters: Hunter, 15, who sings; Phoenix, 6, a dancer; and Jag, 4, who Bleu says is a little comedian. Their parents, David and Martha, met as extras on the New York set of a low-budget Japanese film.

Bleu's father makes his High School Musical debut in "Senior Year" as Chad's dad. He has played his son's on-screen father twice before, including in a film they produced called Free Style. Set in the motocross world, it's due to hit theaters in January next year.

Now back home in Los Angeles, Bleu is spending his days in the studio preparing for his album, tentatively scheduled for February. Two of the album's songs, Moments That Matter and Champion, premiered on Bleu's summer concert tour recently.

Touring, Bleu says, makes dating difficult. Gossip sites have paired him with HSM co-stars Monique Coleman (Taylor) and Ashley Tisdale (Sharpay), as well as Hannah Montana's Miley Cyrus, Brenda Song (The Suite Life of Zack and Cody) and Disney Channel sisters Alyson and Amanda Michalka (Aly and AJ) "at the same time," Bleu says with a laugh. He insists none of those pairings is true. Having a relationship now would be too time-consuming, he says. "Giving my attention and energy to a girlfriend is not something I can fully give right now because of my career."

Bleu is hoping to take on Johnny Depp-type dramatic roles. He has been in several other projects, including appearing on Hannah Montana and starring in 2004 kiddie heist film Catch That Kid and 2005-07 series Flight 29 Down. But it was the HSM franchise, Bleu says, that "made me who I am today, made me grow up. And shooting the final scene was a pretty somber moment."