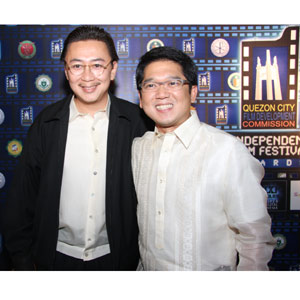 
The Cinema 2 of Gateway Mall in Cubao was filled with eager students, politicians, and filmmakers who were supportive of the 1st Quezon City Independent Film Festival. Twenty-seven short films from six schools participated in the eight-day film festival that officially ended last September 17.


Through the efforts of Quezon City Vice Mayor Herbert Bautista and film fest executive director Jerico "Nico" Antonio, the awards night was held without hitches at the Gateway Cineplex, Araneta Center. Hosts for the evening were Drew Arellano and Bianca Gonzales.

Among the important personalitites that graced the occasion were Senator Mar Roxas, who gave an inspirational speech on the significance of film industry in the Philippines, and Mayor Feliciano Belmonte, who also spoke to the diverse group.

In his speech, Senator Mar Roxas congratulated the winners whose awards are said to "symbolize the meaningful change you have brought to the filmmaking industry."


He continues: "Not only do your films reveal the stories of ordinary Filipinos in Quezon City and the rest of the country; they do so in a manner true to our vision and your craft...May the awards inspire you to foster this change, present the reality of Filipino life and to stand by our people's great destiny."

A Special Citation for Documentary was given by Mr. Jim Libiran, the judge for the Documentary Category, to Mr. Niño Cadiz (Trinity University of Asia) for his short film, Floating Barangay.


QC Vice Mayor Herbert, who was last seen on ABS-CBN's Super Inggo, says that he is very happy with the results of the 1st QCIFF although he suggests that the categories should be clearly defined for the subsequent editions. "Amazingly, mga bata ito, wala silang pondo pero they were able to produce something na may social significance," says the former actor.


When asked about the future plans for the QCIFF, executive director Nico hopes to continue this film fest and expand it to cover full-length films helmed by new directors.
Read Next
Read More Stories About
Herbert Bautista, indie
Post a Comment
Featured
Latest Stories
Trending in Summit Media Network