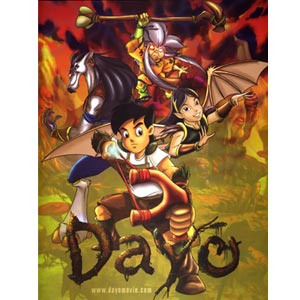 Some of the characters of Dayo include (from left, clockwise) a tikbalang voiced over by Michael V., a nuno sa punso voiced over by Peque Gallaga, a teen manananggal (a winged creature that can separate her torso from her lower body) voiced over by Katrina "Hopia" Legaspi, and a boy named Bubuy, voiced over by Nash Aguas.


Dayo (Wanderer) is a full-length animated film that combines paperless 2D and 3D technologies. Currently, the film is 75 percent done and is expected to be completed by November in time for the 34th Metro Manila Film Fest. By then, the film would have been completed in just two years, much shorter compared to the usual three years needed to complete a traditional full-length animation. The team is now done with the rough animation and is now on the "digital ink and paint" stage. Over 500 artists nationwide worked together to complete this project.


It wasn't easy for Cutting Edge Productions, the local animators behind Dayo, to enter the annual film festival. When they submitted the script by Temi Abad and Eric Cabahug for consideration, the committee didn't immediately accept it. But the team didn't give up and insisted on presenting the project until they convinced the committee that they could do it. The primary consideration was time constraint and meeting the deadline especially for first time producers. Remarkably, Dayo made it to the final 8 out of the 19 hopefuls.

Dayo is a heartwarming story of overcoming one's fear and triumphing over adversity. The plot revolves around Bubuy (voiced by Nash Aguas) who is out to save his abducted grandparents in the land of Elementalia, a magical and mystical world that houses many of the Philippines' mythical creatures and other enchanted elements.

The creative team of Dayo consulted published literature on local mythology. Their main reference is the book Creatures of Philippine Lower Mythology written by Maximo Ramos.


This movie aims to reintroduce the other side of mythical creatures like the tikbalang, kapre, manananggal, and aswang by giving a new dimension to these usual reviled creatures. "They are normally presented as predators or portrayed as villains," explains director Robert Quilao. "We created a new twist to these characters by transforming the scary manananggal into the friendly manananggol (defender) who acts as the guardian of Elementalia."

Quilao also shares that every step of the project has been a challenge for the team, "but the storyboarding stage was perhaps the toughest because it involved setting the mood and look of the whole animation." Working on the story and writing the script also took time. A three-day story conference was held in Tagaytay just to brainstorm on the story, while it took the team three to four months to finish the script.

The team already had talents in mind when they were working on the characters except for the lead roles of Bubuy and Anna, which they held auditions for. For instance, they already had Pokwang in mind for the manananggal yaya of Anna, hence the character sketch is loosely based on her. The team also thought of how it would be like to have Pokwang exchange lines with news anchor Mike Enriquez. However, they were unable to get the real anchor of GMA-7 to voice over the animated character so they got a voice talent who only sounds like Mike Enriquez.


Since the project is fully digital, it's easy to animate the storyboard (also known as animatics). No storyboard could even be seen plastered on the office walls or workstations of Cutting Edge. While the drawing is done traditionally by hand, it's executed directly onto the computer screen or PC tablet, hence, Quilao labels the project as "tra-digital" animation.

Although it's rather difficult and expensive to produce an animation project, "it's the only content we can sell abroad," justifies Jessie Lasaten, executive producer of Dayo and chief executive officer of Cutting Edge. "The world is our market. The idea is to recover half of the investment in the local market, and half of it worldwide. But if we're lucky, we can recover the whole investment locally." Lasaten reveals that Cutting Edge has spent around $1.3 million (around P58 million) to produce Dayo.


SYNOPSIS. Dayo is about an 11-year old kid named Bubuy (voiced by Nash Aguas) who wants to save his beloved grandparents (voiced over by Nova Villa and Noel Trinidad). Along the way, Bubuy meets Anna Manananggirl (voiced by Katrina "Hopia" Legaspi), a teen manananggal (a winged creature that can separate her torso from her lower body) who befriends and helps Bubuy in his quest to rescue his grandparents.

Together, they journey to Elementalia, a fantasy land filled with strange flora and fauna, and a host of popular creatures from Philippine mythology. They see massive waterfalls teeming with gravity-defying merfolk; an awe-inspiring crystal cave that houses a swarm of colorful alitubi; a grand old tree that's home to a motherly female kapre; and a majestic mountain guarded by a big pack of hungry aswangs.

Johnny Delgado is tapped to be the father of Anna Manananggirl while his wife Laurice Guillen lends her voice to minor characters like a diwata or fairy. Director Peque Gallaga serves as the voice of the nuno sa punso. Bubble Gang mainstay Michael V plays a narcissistic tikbalang named Narsi. The teen manananggal has a Yaya Vicky (voiced over by comedienne Pokwang).

Viewers can watch the animated film Dayo when it opens on Christmas Day, along with seven other entries of the MMFF.