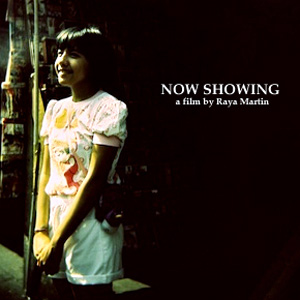 Raya Martin's Now Showing will be screened at the UP Film Institute on September 25 and 27. This indie film is one of the Filipino films screened in the 2008 Cannes Film Festival, along with Brillante Mendoza's Serbis.


Raya Martin, an alumnus of the University of the Philippines will be screening his film Now Showing in his alma mater this week. Envisioned to be the first part of a trilogy called "Box Office," Now Showing tells the story of a female DVD seller stationed in downtown Manila. The second and third installment of the trilogy is titled Next Attraction and Coming Soon.

Theater actress Ness Roque plays Rita, a young girl selling pirated DVD movies in the movie Now Showing. This film by Raya Martin had its world premiere in the 40th Directors' Fortnight of the Cannes Film Festival earlier this year, in the same batch that Brillante Mendoza's Serbis was shown.

Running at 4 hours and 40 minutes, Now Showing is a coming-of-age film that incorporates clips from the ‘60s Filipino movie, Tunay na Ina. The film project received the Hubert Bals Grant at the Cinemanila Boracay Co-Production Meeting in 2005. Post-production is supported by Ignite Media, Inc.


Twenty-three year old filmmaker Raya Martin lived in Paris, France for six months as a scholar of Festival du Cannes' Cinéfondation—making him the first Filipino to be accepted in the prestigious institute. His first feature, Short Film About the Indio Nacional, was screened at the Rotterdam International Film Festival in 2007. Raya's second film Autohystoria won the Lino Award Grand Prize and Best Director in the ninth edition of the Cinemanila International Film Festival. Martin is also the first Filipino to be granted the Fond Sud by the French government for his film currently in development, Independencia, a family drama that takes place during the American occupation.