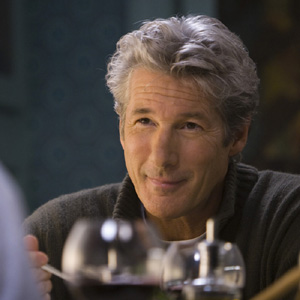 "What's beautiful about Nights in Rodanthe is that it shows how two people in crisis can get past their defenses, reach out to each other and make enormous impact on each other in a relatively short period," says Richard Gere about his upcoming film.


Golden Globe Best Actor-winner Richard Gere (Chicago, Shall We Dance) discovers that love comes from unexpected places in Warner Bros.' new romantic-drama Nights in Rodanthe based on the Nicholas Sparks best-selling novel about two people who discover there is always a second chance to find the love of your life.

In the film, Paul (Gere), a surgeon, has come to the Outer Banks of Rodanthe to meet Robert Torrelson, the widower of a patient who accidentally died in his care. Ostensibly he is here to tie up loose ends and maybe circumvent a lawsuit, but there may be more compelling reasons driving him.

Says Gere, "Paul chose early on to put career first, to be the best doctor he could be, not for the money but genuinely to help people. And he has accomplished that, though, in the process, he is estranged from his adult son [played by James Franco] and has lost his marriage and his home. Now, facing this emotional and spiritual crisis, he walks away from all the former touchstones of his life. He arrives at Rodanthe uncharacteristically untethered."

Gere continues, "What's beautiful about Nights in Rodanthe is that it shows how two people in crisis can get past their defenses, reach out to each other and make enormous impact on each other in a relatively short period."

Remarking on their onscreen chemistry, Gere says, "Our friendship has evolved over the years into a great sense of trust. I love working with her." Gere also believes that the differences between who they were in their Cotton Club days, both as actors and as individuals, and who they have since become, is appropriate to the kind of relationship that develops between Paul and Adrienne, Lane's character. "What was important to me in taking on this role, and Diane too, I believe, was that it wasn't a story about kids who are goo-goo-eyed about each other from the moment they meet. It's not that kind of movie. There are scenes in which they barely look at each other, but there is a powerful and deepening understanding at work and you can feel it evolve in front of you."

As all of these elements come together in the growing rapport between Paul and Adrienne, two people caught by a storm in the Outer Banks, "It never feels as though we are watching two actors. Rather, it's as if we're just watching two human beings experiencing life," notes screenwriter George Wolfe.

"I think there exists inside all of us a need to see emotional truth and emotional possibilities when we watch a story unfold on screen," Wolfe continues. "We all understand how fragile life is, how fragile love is, and how precious the time we have with each other. In some ways happiness is like an air bubble; you grasp it too tightly and it's gone. It's wonderful to see two people still learning about who they are and re-awakening to the idea that great love is possible."

Opening soon across the Philippines, Nights in Rodanthe will be distributed worldwide by Warner Bros. Pictures, a Warner Bros. Entertainment Company.