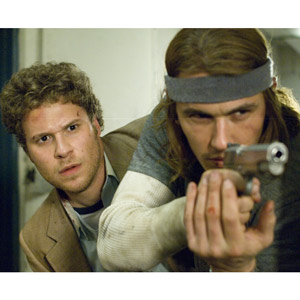 In Pineapple Express, Seth Rogen (left) and James Franco (right) play characters whose lives are in peril because of drugs. This action-comedy will soon be screened exclusively in at Ayala Malls Cinemas (Glorietta 4 & Greenbelt 3).


James Franco (Spider-Man) and Seth Rogen (Knocked-Up) star in Columbia Pictures' new action-comedy Pineapple Express, the story of two lazy guys on the lam and their comic attempt to stay one step ahead of a band of vicious killers. Produced by new comedy kingpin Judd Apatow, Pineapple Express will be shown soon exclusively at Ayala Malls Cinemas (Glorietta 4 & Greenbelt 3).


In the film, process server Dale Denton (Rogen) has a grudging business relationship with the laconic Saul Silver (Franco), deigning to visit only to purchase Saul's primo product--a rare new strain of pot called Pineapple Express. But when Dale becomes the only witness to a murder by a crooked cop (Rosie Perez) and the city's most dangerous drug lord (Gary Cole), he panics and dumps the Pineapple Express at the scene. When it's traced back to him, Dale and Saul run for their lives and they quickly discover that they're not just suffering from weed-fueled paranoia. If they survive, these two just might become real friends. All aboard the Pineapple Express!


"This film uses comedy to say that nothing good comes from getting high," says Judd Apatow. "All these guys' lives are a mess, they are going nowhere and, hopefully, almost getting murdered makes them rethink their current way of life. I always want the movies we make to be hilarious and thoughtful. I want to feel good about what we are saying."


As funny as the movie is, the filmmakers were also very aware that they had to put their characters in real peril to trigger the high-stakes action that fuels the movie. "If you don't believe that these guys are in danger of getting killed, you won't believe that they would ever change," says Apatow. "So, we looked at other action comedies that we liked such as Midnight Run and Pulp Fiction that had a common thread of just enough silly, over-the-top violence to show that the characters are in way over their heads."


The idea for the film was one that Apatow had hidden away on a file. As Apatow tells it, "Many years ago, I thought to myself, 'What would an action movie be like if the leads were chronically stoned?' It seemed funny to me, and I was even sober at the time."


Apatow wrote the story with Seth Rogen and Rogen's writing partner, Evan Goldberg, and then Rogen and Goldberg wrote the screenplay. The writing team was intrigued by the chance to write an action movie and explore the comedy of the characters' situation. "The hook for us was to create characters that are so stupid and lost, it'd take someone trying to murder them for them to realize that they need to get their act together," says Rogen.


"That unlikely friendship is the heart of the film," says producer Shauna Robertson. "When you see their friendship forged by fire--literally--you get why they would start to see each other as more than just a buyer or dealer.

"It was great that Seth and James were friends before we shot the film," adds Robertson. "They have a shorthand that pushes them both to be funnier. They really are genuinely amused by one another!"