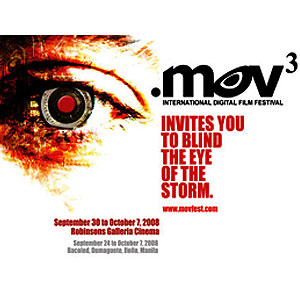 The third edition of the .MOV film fest will take place at Robinsons Galleria Cinema from September 30 to October 7, 2008.


.MOV (pronounced "dot-mov"), the first digital filmfest in the Philippines which jump started the digital revolution in the country back in 2002, will have its third edition in Robinsons Galleria Cinema from September 30 to October 7, 2008.


The opening night will be on September 30, Tuesday, and the closing and awards night will be on October 4, Saturday. Parallel screenings in the cities of Bacolod, Dumaguete, and Iloilo will be held from September 24 to October 7. The 3rd .MOV International Digital Film Festival, headed by festival director Khavn De La Cruz has six major sections consisting of foreign and local full-length and short films, tributes, workshops, film concerts, and after parties. The motto for this year's festival is "Blind The Eye Of The Storm"--losing sight of the limits and controls that plague cinema, so that we can stare at our infinite possibilities as a culture.


DIGITAL DEKALOGO 10X10.MOV presents ten of the best foreign digital full-length films from the past 3 years.

This will be presented by ten of the best local filmmakers who have pushed the boundaries of cinema in their own unique ways: Ato Bautista, Jeffrey Jeturian, Jim Libiran Auraeus Solito, Adolf Alix, Raya Martin, Sherad Anthony Sanchez, Ditsi Carolino, Manny Montelibano, and John Torres.


SHORTS.MOV | features works from the two most prestigious short film festivals in the world: shortfilms from Clermont-Ferrand (France) and music videos from Oberhausen (Germany). The 3rd SILVERSHORTS Shortfilm Competition presents the new Philippine filmmakers to watch out for--the twenty finalists from both the student and open divisions.


AFTERPARTY.MOV | ends each night with a bang at the indie-place- to-be Cubao X, courtesy of music and entertainment from top notch events, media organizations and talent management groups.