Topel Lee talks about "Sundo" and working with Robin Padilla 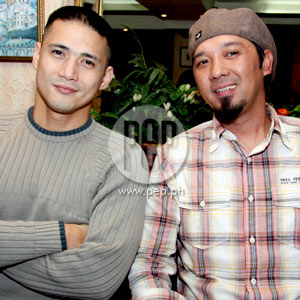 Robin Padilla (left) and director Topel Lee team up for the horror film Sundo—a Viva Films and GMA Films joint venture. Robin took note that Topel is fond of using storyboards to guide everyone during a shoot. "We do a lot of storyboards," confirmed Topel. "Nakakatulong din, kasi hindi pabalik-balik ng set-up. Mas matipid din for the producers."

Directing Robin Padilla is both an exciting and intimidating job, according to Sundo director Topel Lee.

Since Robin is accustomed to portraying action hero roles, Topel laughingly talked about how Robin would sometimes forget that he is doing a horror picture and that his character, Romano, is prone to moments of vulnerability.

It was a comical situation, to say the least, with Topel reminding Robin to act scared on certain scenes for them to effectively project fear and uncertainty to the viewers.

A DIFFERENT ROBIN. Presenting a different facet of Robin, one that is capable of showing fear in his eyes, is very crucial according to the young director.

A horror project entails both strong visuals and audio for maximum appeal. That's why the entire cast along with the production team are all proud of Sundo's technical aspect, like the cameras used, pre-production techniques employed down to the sound effects—all complementing the story's overall flow.

But other than those mentioned factors, Topel believes that the film's strength remains in the main character. Tapping a male character for the lead role in a horror-suspense film is a novelty in local cinema, observes director Lee.

In Sundo, Robin plays a military operative who resigns from the military and goes into seclusion in Baguio upon learning that he has supernatural gifts. Robin's character, Romano, has the ability to see ghosts who come to pick up their loved ones who are on the brink of sudden, tragic death.

One admirable trait of Robin is his professionalism and his being amiable to co-stars and the staff. Robin likewise expressed admiration to Topel for his dedication to his craft.

Despite the mutual respect shown by both men, direk Topel confided that looking at Robin Padilla up close still never fails to bring out the fan in him.