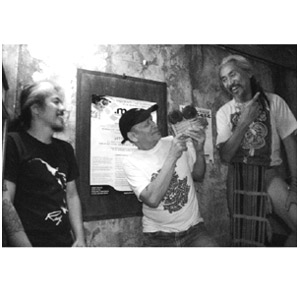 Digital filmmakers (from left) Lav Diaz, Rox Lee, and Kidlat Tahimik are honored in the third edition of the .MOV digital film festival.

In his speech honoring the three pioneers of independent filmmaking in the country, JP Carpio pointed out the lessons that Kidlat Tahimik, Rox Lee, and Lav Diaz have imparted to young filmmakers.

"The only things they ask us, is to be ourselves. To reveal ourselves in our films as they have. To be true to ourselves and the truths of our own personal lives, and to be courageous enough to share these truths no matter what, at great personal loss, difficulty, and cost, and why?"

The creator of the short film Bunker 0: Sumirib also described the influences of the three indie directors on the new generation of filmmakers.

"With Kidlat, we participate in an exploratory scavenger hunt and collage like style where the cumulative effect on the viewer is greater that the sum of his selected shots infused with both an indio and wordly wit, a childlike playfulness, and a humble wisdom from experience,

"With Rox, his interests in different kinds of tensions, a jittery and stuttering pace that is at times confrontational and freakish and also a lot of times very funny, and not just for being plain funny, but funny for the truths they share,

"With Lav, his stately and slow takes allow us to see and hear supposedly everyday things in ways that we have never heard and seen them before, because we realize that we never actually paid any attention to begin with.

"It's about time that they were given tribute. I am thankful that .MOV chose to do it NOW."


Lav Diaz brought honor to the country for his lengthy films that have received numerous awards from international award giving bodies such as the Venice Film Fest and the Fribourg International Film Festival. He was spotted by PEP (Philippine Entertainment Portal) during the recently concluded 31st Gawad Urian held at the Cultural Center of the Philippines. His film Death in the Land of Encantos received the Pinakamahusay na Disenyong Pamproduksyon (Best Production Design) from the Manunuri ng Pelikulang Pilipino. Lav accepted the award along with Dante Perez, the production designer of the film.

The filmmaker behind the movies Melancholia and Death in the Land of Encantos now has his own album called IMPYERNO: Songs From and Inspired by the Cinema of Lav Diaz.


PEP was also present when Kidlat was honored by the Manunuri ng Pelikulang Pilipino last October 1 at the CCP. The Baguio-born filmmaker received the Natatanging Gawad or the lifetime achievement award for his immense contribution to Philippine cinema. True to his Ifugao roots, Kidlat received the award with much aplomb by wearing a g-string and banging his gong.