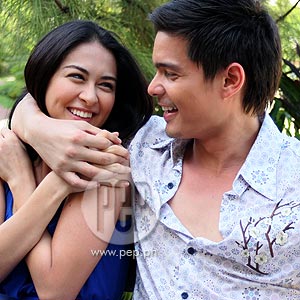 The chemistry of Dingdong Dantes and Marian Rivera will be put to a test on the big screen via GMA Films and Regal Entertainment's One True Love. It will open in cinemas nationwide starting November 19.


For their first movie project as a love team, Dingdong and Marian will assume mature roles unseen in their past primetime soaps. Iza Calzado also joins the love team in One True Love, which is produced by GMA Films and Regal Entertainment.


SYNOPSIS. In the film, Dingdong plays Migs, a young man who is in a long-term relationship with Iza Calzado's character named Bela. The relationship was put to the test when Bela and her family decided to go abroad, leaving the two lovers with no choice but to settle for a long distance affair. The couple struggle to keep their long distance relationship but they eventually decide to go their separate ways.

Migs then meets a pretty nurse named Joy, portrayed by Marian Rivera. Smitten and confused, Migs fell in love with Joy and immediately offers marriage, leaving Bela and their relationship behind.


Bela, determined to fight for her love, quickly returns to the Philippines with the intention of winning back her former boyfriend. This situation forces Migs to painfully contemplate whether to return to Bela or move on with his new life with Joy.

Who will be the one true love of Migs: his first love Bela (Iza) or his current flame Joy (Marian)?


He further added: "Given the situations of the character they play, these three people are put into a situation where they have to answer through actions these questions and, more often than not, the result is not as joyful as expected."


One True Love aims to present all the extreme emotions involved in falling in love, including pain and happiness—elements that were vividly touched in the film.


GOING DARING. In an separate interview, Marian said that One True Love is her most daring roles so far due to the love scenes required from her and Dingdong.


Direk Mac commended Dingdong, Marian and Iza for their cooperation and professionalism especially when it comes to the intimate scenes. "Walang ilangan," he proudly stated, "absolutely wala. And I think because they were well trained for that."


The film was entirely shot here in Metro Manila. Direk Mac stressed that the project's main strength is the story itself and that the film aims to focus on this concept as envisioned by its writers.


"I think it's the formulation of the story and the magic of the actors that created the visual delight of the film," he stated.


Watch Dingdong Dantes, Marian Rivera, and Iza Calzado in a dramatic love triangle in One True Love, which opens in cinemas on November 19.