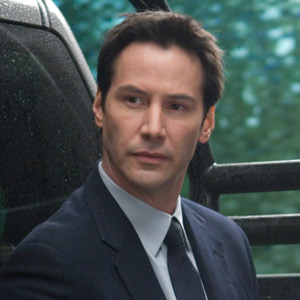 In the movie The Day The Earth Stood Still, Keanu Reeves (in photo) is an alien who becomes the friend of astro-biologist Helen (played by Jennifer Connelly).


Jennifer Connelly had long been an admirer of the science fiction classic The Day The Earth Stood Still and when she received a script for a re-imagining of the film for a contemporary audience she was immediately intrigued by the possibilities of working on "such a great story" alongside Keanu Reeves.


Directed by Scott Derrickson (The Exorcism of Emily Rose), with Keanu Reeves as Klaatu, Connelly plays Helen Benson--played in the original by Patricia Neal--a scientist who befriends the alien when all the other humans treat him with a mixture of suspicion, aggression and fear.


Helen is an astro-biologist who is part of the team that is called in to interrogate and analyze Klaatu after he lands on Earth. She's also a single mother who can see beyond the obvious scientific interest in him as a ‘specimen' and connects with him on an emotional level.


When he escapes from his captors, he meets up with Helen and her young son Jacob, played by Jaden Smith, who give him shelter as the increasingly anxious authorities try to track him down. In the new film, Helen plays a far more active role in the story compared to the original.
|

Question: The story in the original is dominated by the threat that mankind is about to destroy itself with nuclear war. How has the story been updated?

Answer: Our film has been updated on a number of levels. The original was very much a film of its time that really spoke to the political climate of 1951, and it largely focused on the issues of the Cold War era and the proliferation of nuclear weapons. Now it's the threat of violence but also the way we are living on the planet, the way that we treat each other and the way we treat the Earth. It looks at the fact that as a culture, it's not sustainable to live like this on a number of levels. So I think the movie speaks to us now in terms of the crises we face.


Q: Jaden was very good in Pursuit of Happyness. Is he good in this?

A: He's lovely. I think it was a hard line for Jaden to walk because Helen and Jacob have a relationship that is complicated and I think Scott Derrickson [the director] wanted to use that to serve as a kind of microcosm for Klaatu. It's hard to play a kid who is a bit bristly with his parents and yet you still love him and you get where it's coming from. I think it was a little bit complicated and it's to Jaden's credit that he managed to do that in such a convincing way. He is really good.

A: I think he was absolutely marvelous as Klaatu. He is so hard-working and so devoted to his work. He cares so much about what he is doing and I found it really moving in terms of the extent to which he cares about everyone and the way he works and pushes himself. He's incredibly polite and incredibly professional, and so kind to everyone on the set.

Jennifer Connelly was born in Brooklyn and first acted as a child, memorably making her film debut at just 13 years old, playing young Deborah in Sergio Leone's gangster epic Once Upon A Time In America. She went on to star in George Lucas's fantasy film, Labyrinth.


After studying English at Yale and Stanford, she resumed her acting career with films including career opportunities, Mulholland Falls and Inventing The Abbotts. Her other credits include Waking The Dead, Requiem for a Dream and A Beautiful Mind, playing Alicia, the wife of tortured mathematics genius John Nash, a searing performance which would earn her the Oscar for Best Actress in a Supporting Role.


More recently, her films have included House of Sand and Fog with Sir Ben Kingsley, Blood Diamond with Leonardo DiCaprio and Reservation Road with Joaquin Phoenix.


The Day the Earth Stood Still opens December 11 in theaters nationwide from 20th Century Fox to be distributed by Warner Bros.