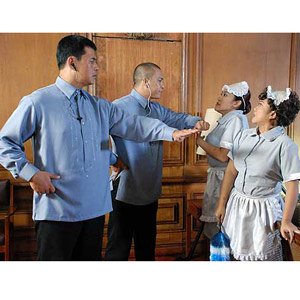 Ai-Ai delas Alas (second from right) and and Eugene Domingo retain their charm and comedic chops despite the five-year gap since they starred in the first installment of Ang Tanging Ina.


When Ang Tanging Ina was released in 2003, everyone was taken by surprise. Back then, Ai-Ai de las Alas was not a Megastar or a Star for all Seasons who can topbill a movie all on her own. But armed with spontaneous goofs and inventive spoofs, Ang Tanging Ina made millions in the box office, making it one of the highest-grossing Filipino films during that time. (Kris Aquino's Sukob dethroned it in 2006.)

SYNOPSIS. Ai-Ai returns as Ina Montecillo, the single mother of twelve. Most of the original cast reprise their roles. Eugene Domingo plays the wacky but supportive best friend, Rowena. The children of Ina are played by: Carlo Aquino as Dimitri, Alwyn Uytingco as Pip, Shaina Magdayao as Severina, Serena Dalrymple as Cate, Jiro Manio as Shammy, and Yuki Kadooka as Ten-Ten.

Marvin Agustin (Juan), Nikki Valdez (Tudis), Heart Evangelista (Portia), and Mark Acueza (Sixto) did not reprise their roles. Marvin and Heart are now contract stars of GMA-7, while Nikki and Mark have retired from show business. Ina explains their whereabouts during the film's opening sequence.

Faced with the same dilemma she had in Part 1, Ina struggles to make both ends meet for her family but Lady Luck doesn't seem to be on her side. She unwittingly sabotages every chance she gets to secure a stable job. So, she continues to jump from one odd job to the next as fast as reality shows churn out new TV stars.

But there's more to being a mother than just being an income provider. All she wants is for her children to be proud of her. Ina soon finds herself as a chambermaid in Malacañang Palace and eventually becomes the president of this 80+ million-strong nation. How it happened is for viewers to find out.

For a movie about the country's president, it would have been inevitable for Ang Tanging Ina N'yong Lahat to have political undertones. For instance, satire never fails to give comedies a deeper meaning, that beneath the surface of humor and folly lie genuine societal problems. But director Wenn Deramas and screenwriter Mel del Rosario stay away from politics, merely scratching the surface and taking the safe route. Hence, the film just reflects the colorful past of Philippine politics, making pop-culture references to snap elections, special treatment for convicted ex-politicians, and Pinoys' obsession with People Power revolts.


THE VERDICT. Stripping the film down to its core, the real gift of Ang Tanging Ina N'yong Lahat are the performances. No doubt that Ai-Ai delas Alas is one of the most versatile actresses today. She embodies what the character asks for. Playing a character as comical as Ina, it would be easy for her to reduce the character to a mere caricature. But through Ai-Ai's understanding of the demands of her character, she makes Ina a three-dimensional character capable of giving selfless love and making mistakes.

Eugene Domingo also puts her game face on as Ina's sidekick. She has a natural gift of humor. She could play a cactus and still be funny. Whenever this duo is together, the screen lights up with unanimous laughter and cheers. There are corny jokes thrown in once in a while and slapstick humor is abundant but there are several memorable moments worth mentioning.

One of the funny scenes in the movie is when Ina and Rowena catch Jeffrey, (John Prats) visiting Severina (Shaina Magdayao) in their humble abode (If you'll remember, Jeffrey used to date Portia.) In this sequel, Jeffrey allegedly broke Portia's heart and is now out to get Severina. The best friends confront Jeffrey and ask him to stay away from Severina. Ina asks, "Tutuhugin mo ba ang mga anak ko?" Suddenly Rowena butts in, "At sino ang isusunod mo, ako?" That scene was definitely hilarious.

Although the supporting cast isn't given much to do, they have their own little moments to shine. Another funny scene is during the confrontation between Dimitri (Carlo Aquino) and Pip (Alwyn Uytingco) after the former finds out that the latter has a sex scandal currently in circulation. Dimitri says, "Kayo talagang mga bakla, salot!" Without hesitation, Pip answers back, "I may be a slut, but I'm the best slut in town." The line is picked up from a line delivered by Anne Curtis in ABS-CBN's Maging Sino Ka Man. "Tanga! Salot ang sabi ko, hindi slut!" exclaims Dimitri.

Direk Wenn and scriptwriter Mel stick to the formula that made its predecessor a runaway blockbuster, combining a hefty dose of comedic stunts and a hint of family drama just enough to wet our hankies. The film could have experimented a bit to shake things up. But as it is, it is good to know that the charm of Ai-Ai and Eugene hasn't worn off one bit in this latest "Ina" installment.