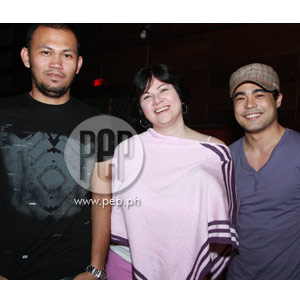 
The movie Aurora is creating buzz because of the fact that it has been giving an X-rating twice by the Movie and Television Review and Classification Board (MTRCB). It was shown last night at the University of the Philippines Cine Adarna (where MTRCB ratings do not apply).

In the said indie film, Rosanna Roces plays a woman working for a medical mission of an NGO. She tries desperately to escape her captors who are members of the Lost Command. She is closely guarded by two Muslims (portrayed by Sid Lucero and Kristoffer King). In the forest, she is raped by Kristoffer while Sid does nothing to stop his comrade.

Director Adolfo Alix Jr. explains to PEP (Philippine Entertainment Portal) that the Lost Command is a renegade group that operates outside of the law. "Para siyang renegade, breakaway group sila. Normally, breakaway group sila ng military or members sila ng outlaws. Renegade sila na either for or against the government."

This film, which is written, produced and directed by Adolf, earned an X rating because the members of the review committee found the rape scene between Rosanna and Kristoffer "too explicit" and "unfit for public viewing." They were referring to the scene wherein Kristoffer kept on mashing the left breast of Rosanna as he raped her.

Aside from the controversial rape scene, the movie also shows the characters of Sid and Kristoffer smoking marijuana.


TWO SIDES OF MUSLIMS. Is he afraid of being criticized for placing Muslims in a negative light through his film?

In fact, Adolf even asked help from his crew members who were Muslims to help him with the Arabic dialogues in the film.

According to www.answers.com, aurora borealis (also called the northern lights) are colored and white flashing lights in the atmosphere that are caused by the interaction of particles from the sun with the upper atmosphere. It is interesting to note that the name Aurora also means "the first light of day."

The film Aurora is being reviewed by the Office of the President, which has the authority to overturn the MTRCB's classification.