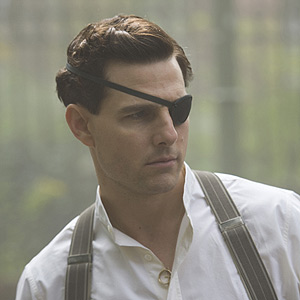 
Based on a stunning true story, Tom Cruise stars as Colonel Claus von Stauffenberg in the suspense film Valkyrie, a chronicle of the daring and ingenious plot to eliminate one of the most evil tyrants the world has ever known.

A proud military man, Colonel Stauffenberg is a loyal officer who loves his country but has been forced to watch with horror as the rise of Adolf Hitler has led to the events of World War II. He has continued his military service, all the while hoping someone will find a way to stop Hitler before Europe and Germany are destroyed. Realizing time is running out, Stauffenberg decides he must take action himself, and in 1942, on his own initiative, attempts to persuade senior commanders in the East to confront and overthrow Hitler.

Then in 1943, while recovering from injuries suffered in combat, Stauffenberg joins forces with the long-existing civilian anti-Hitler conspiracy, a group of men hidden inside the highest reaches of power. Armed with a cunning strategy to use Hitler's own emergency plan to stabilize the government in the event of his demise—Operation Valkyrie—and turn that plan on its head to remove those in power and cripple Hitler's regime, these men plot to assassinate the dictator and overthrow his Nazi government.

With everything in place, and with the future of the world, the fate of millions, and the lives of his wife and children hanging in the balance, Stauffenberg is thrust from being one of many who oppose Hitler to being the one who must kill Hitler himself.

Bryan Singer began his filmmaking career with the highly acclaimed suspense thriller The Usual Suspects and went on to bring the comic book worlds of the X-Men and Superman to the screen with a dynamic originality. His direction is known for its edge-of-your-seat tension and gripping storytelling. But with Valkyrie, Singer brings those cinematic skills to a completely different kind of story—a true tale of extreme daring from inside the Nazi regime.


For Singer, Valkyrie was a chance not only to take on his first true story but to also explore a period in time that has held a dark fascination for him since childhood, when his Jewish background made him acutely aware of the horrors perpetrated by Hitler and the Nazi government of Germany. "At a very young age, I learned there were Germans who had tried to kill Hitler," he says.


"I didn't know specifically about Stauffenberg and Olbricht, but I had heard about a bomb in a briefcase, and to me that was always a big deal, to understand that all Germans weren't Nazis. It would be devastating at such a young age to believe that the whole of a country could be filled with such hate, and it was good to know there were a few who tried to stand against it."

Singer began doing his own research, reading extensively about every aspect. "Before I made this movie I needed to understand not just the role of the people trying to remove Hitler, but why Hitler happened in the first place." Singer also met with a number of people who could give him an inside perspective. "We had private meetings with members of the Stauffenberg family," he says. "On the other side, we met with Hitler's former bodyguard, who, I believe, was the last person to leave the bunker where Hitler committed suicide. These meetings were done specifically to bring new perspectives and ideas to the material. They were very informative, and sometimes transformational in terms of what we learned."

All of this translated into Singer's stylistic approach to the film, "We weren't making a documentary. The important thing was getting the truth of the story across in the most engaging way," Singer says. To this end, Singer made the decision early on to allow each member of the film's international cast to use his or her own accent. "I've navigated through international accents in different ways before, sometimes altering them, sometimes leaving them," he says. "But with Valkyrie, I had a phenomenal cast playing a fascinating, and sometimes terrifying, group of characters, and I felt it would be stronger to have them use their own natural dialects. When the film begins, you're transported to this world of German soldiers in the mid-1940s, and the thing that draws you into that world are the characters—these proud military men who saw that they had a monstrous leader and felt they had to get rid of him. The first priority was allowing these characters to come through in strong and very human performances."

Valkyrie opens February 11 in theaters nationwide from 20th Century Fox to be distributed by Warner Bros.