Drew Barrymore lends her voice for the "Beverly Hills Chihuahua" 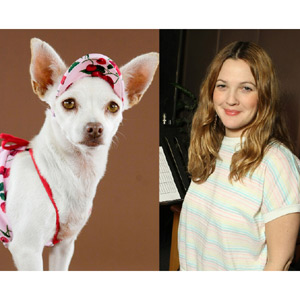 Drew Barrymore (right) lends her voice for the character of Chloe, portrayed by a white Deerhead Chihuahua. Enjoy a wacky roadtrip to Mexico by watching Walt Disney's Beverly Hills Chihuahua, now showing in cinemas nationwide.
Drew Barrymore has been a favorite of film audiences for almost three decades, having done her first movie role at age 5. Behind the camera, she is also enjoying success as a producer under her own Flower Films banner, with such hits as Charlie's Angels and 50 First Dates. Now, she lends her voice to Chloe, the pampered, diamond-clad Chihuahua who gets lost in Mexico in Walt Disney Pictures' new comedy adventure Beverly Hills Chihuahua.

In the film, Chloe enjoys her luxurious lifestyle so much, she hardly notices Papi (voice of George Lopez), a tough looking Chihuahua who happens to be head-over-paws for the fashionista pooch. But when Chloe gets lost in the rough streets of Mexico—without a day spa or Rodeo Drive boutique anywhere in sight—Papi heads south of the border to rescue his true love.

Beverly Hills Chihuahua director Raja Gosnell had previously worked with actress Drew Barrymore on the hit comedy Never Been Kissed and thought she was perfect to voice Chloe. "I pitched the script to her and she just said, ‘Let's do it!'"

Screenwriter Jeff Bushell actually wrote Chloe with Drew Barrymore's voice in mind. "You don't want Chloe to come off as completely unlikable. Drew has this natural sweetness to her and this real genuine quality in her voice. She is one of the few people who can actually make our character have that edge, but still be lovable and sweet."

Barrymore, an animal lover, added something special to the character, says producer John Jacobs. "When we saw Drew reading the character, Chloe just came to life, and everybody fell in love with the character on the spot."
"It was fun to play someone who starts off kind of snooty and righteous," says Barrymore. "She thinks she knows what life is all about and gets humbled along the way."

"For a talking-dog movie, it's a very humanistic story," says Gosnell. "They have human feelings and human emotions and human souls, but we've been very conscious not to push the envelope and make them Super Dog. These are real dogs that do things that real dogs can do."

The pampered Chloe character is portrayed by a white Deerhead Chihuahua named Angel. Angel had four doggie doubles who were trained to do specialty behaviors like swimming and running. Head animal trainer Mike Alexander admits that Angel is a bit snooty in real life, just like her character. "You can see it when you work her," he says.