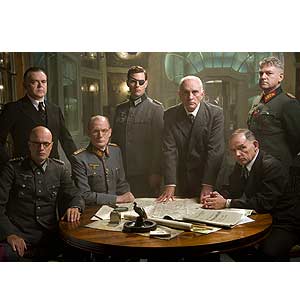 Germans plot to assassinate Adolf Hitler by using his own emergency plan called Operation Valkyrie. This military operation is the basis of the action-suspense film Valkyrie, which opens in cinemas nationwide starting February 11, 2009.
In a country in the grips of evil, in a police state where every move is being watched, in a world where justice and honour have been subverted, a group of men hidden inside the highest reaches of power decide to take action.

Tom Cruise stars in the suspense film, Valkyrie, based on the true story of Colonel Claus von Stauffenberg (Cruise) and the daring and ingenious plot to eliminate one of the most evil tyrants the world has ever known. Director Bryan Singer (The Usual Suspects, X-MEN and Superman Returns) re-teams with Academy Award®-winning screenwriter Christopher McQuarrie to bring to life the story of the men who led the operation to assassinate Hitler. The film also stars an acclaimed cast including Kenneth Branagh, Bill Nighy, Tom Wilkinson, Carice van Houten, Thomas Kretschmann, Eddie Izzard, Christian Berkel and Terence Stamp.

A proud military man, Colonel Claus von Stauffenberg is a loyal officer who serves his country all the while hoping that someone will find a way to stop Hitler before Europe and Germany are destroyed. Realizing that time is running out, he decides that he must take action himself and joins the German resistance. Armed with a cunning strategy to use Hitler's own emergency plan—known as Operation Valkyrie—these men plot to assassinate the dictator and overthrow his Nazi government from the inside. With everything in place, with the future of the world, the fate of millions and the lives of his wife and children hanging in the balance, von Stauffenberg is thrust from being one of many who oppose Hitler to the one who must kill Hitler himself.

Kevin McNally plays Carl Goerdeler, the former mayor of Leipzig. He was the son of a Prussian district judge, and after studying law became a local civil servant.

He also became price commissioner in the government of Heinrich Bruning and remained in office when Adolf Hitler came to power in 1933. He then resigned after disagreement with Hitler over his policies. But when the July 20 bomb attempt backfired, he was betrayed and arrested. He was beheaded in Ploetzensee jail in Berlin in 1945.

Christian Berkel plays von Quirnheim, once a committed Nazi officer who became disillusioned with Hitler's conduct of the war in 1943. Drawn into the conspiracy, he was shot in July 1944, when Hitler survived the bomb, which went off in his headquarters in East Prussia.

Bill Nighy plays the general who was one of the main architects of the operation. He mistrusted Hitler from the earliest days but served with distinction in the campaign against Poland in 1939 and against France the following year. The general was shot in the Bendlerblock in Berlin, the headquarters of the army high command, where the conspirators had hoped to stage a coup.

Terence Stamp plays the General, one of the only officers to stand up to Hitler in the early days of his regime. As head of the general staff, the British actor's character knew a war against the West was unwinnable and quit in August 1938. The General joined the resistance later in the war and was arrested after Valkyrie failed. He was allowed to commit suicide with his own pistol but managed to blind himself instead. He was killed by a Nazi stormtrooper.

David Schofield, previously seen in the Pirates of the Caribbean films, plays the Field Marshal who was one of the conquerors of France in the Blitzkrieg of 1940.

Like Stauffenberg, the British actor's character came to realize Hitler was leading Germany to disaster and joined the conspiracy against him in 1942.
Kenneth Branagh plays Stauffenberg's closest accomplice in the plot.

Although he was initially a Nazi sympathizer, the Shakespearean-actor's character became disenchanted with Hitler's war plans. He planned several assassination plots, but all failed. When he heard that the Valkyrie plot had failed, he killed himself with a hand grenade on the eastern front. He left behind several papers, one of which said: "Hitler is a dancing dervish. One must shoot him."