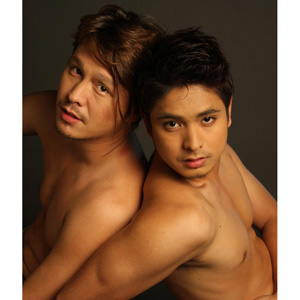 Baron Geisler (left) and Coco Martin (right) veer away from stereotypes in portraying homosexual men in the Cinemalaya entry Jay. The film is currently being screened in select SM cinemas.


The independent film Jay certainly lives up to all the recognition and good feedback that it received since its debut at the 2008 Cinemalaya Philippine Independent Film Festival. The movie is a satire on how media's practices can take advantage of its subjects and how this form of exploitation can lead to the corruption of these individuals as well.

The central character of the movie is Jay Mercado, a professor who teaches Christian Living at a local school in Pampanga. Audiences never meet him during the entire course of film but we get glimpses into his life through the story being produced by a TV show producer who, incidentally, is also named Jay.

Baron Geisler portrays Jay Santiago, the TV executive who looks through photographs and interviews people close to the victim in order to piece together the life of his namesake after he is found brutally murdered in a room. We eventually learn that Jay Mercado was a gay man who was beloved by his family and peers, but he also had a secret relationship with a man named Edward (Coco Martin). The killer is apprehended in the end but this is just a minor detail; more important is the unscrupulous means by which Jay Santiago completes his story for his "documentary" show on television.

It is surprising to find out that Jay is the first film that director Francis Xavier Pacion has made. While watching the movie, you would never think that a newbie could craft his scenes and execute the whole movie like a veteran. We watched a film that could pass as an informational documentary without being preachy and boring. The script alone is a sensation. Witty and humorous lines provide laughs throughout the movie but, in truth, the punchlines are really uncomfortable reactions to a glaring reality in the media industry today.

Jay has been critically acclaimed particularly for the acting prowess of the stars in the film. Baron Geisler proves to be the greatest surprise as he plays the role of a gay reporter. He makes no over-the-top effeminate gestures or exaggerated tonal voices that most actors would resort to. Instead, we see a natural ease that is believable, realistic and not at all stereotyped.

Coco Martin, who plays the ex-boyfriend of the gay victim, is equally adept. The character he plays is endearing as a shy, humble but very lovable man whom any gay man could easily fall for. There is even a very charming chemistry between the two actors onscreen, to think that these are two straight guys playing a role.

But what's most admirable is the support cast in the film. The actors who portray Jay Mercado's mother, sister, younger brother, his colleagues, and even the killer—all of them display admirable acting that would shame big-name stars often seen in films today. Having a low budget is no excuse to justify films with second-rate acting. Jay clearly proves that it is possible to create art on a shoestring budget.

As a media person myself, I am forced to reflect on the work that we do unconsciously everyday. While the situations in Jay are done to the extreme, it still pricks our conscience as it reminds us how we treat the subjects of our stories. People outside the industry will also enjoy the film because it delves into the ethical practices of the different media forms that they see everyday.

Without doubt, Jay has the makings of a classic film that generations will watch over the years for its social and moral relevance. Isn't this the true measure of a great film?


Danio Caw is the resident food reviewer of Yummy Magazine. He is the team publisher of the home and entertainment titles of Summitmedia.