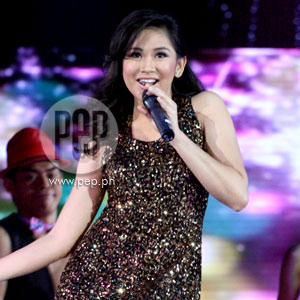 When asked if she developed a crush on her leading man John Lloyd Cruz, Sarah Geronimo admitted, "Yes, kasi kung ganun naman kagwapo, ka-professional at kabait ang leading man mo, siyempre hahangaan mo naman."
After the release of their blockbuster movie, A Very Special Love, fans of John Lloyd Cruz and Sarah Geronimo have been eagerly waiting for the continuation of their love story. See Miggy Montenegro and Laida Magtalas once again in their post-Valentine movie titled You Changed My Life.

In the The Buzz Tough Ten segment last February 8, Sarah was asked by host Kris Aquino to enumerate three gentlemen who have changed her life at this point in time. Sarah revealed thah they are: her manager Kirby Del Rosario who has made her dreams came true because of his continuous trust in her talents; second is her father Delfin Geronimo, who always supports and trusts her in everything that she does; and third, of course, her handsome leading man, John Lloyd Cruz who has given her great memories.

Sarah was also asked if she really had a crush on John Lloyd since they became very close while filming A Very Special Love and You Changed My Life. Sarah answered yes without any hesitations. "Kasi kung ganun naman kagwapo, ka-professional at kabait ang leading man mo, siyempre hahangaan mo naman."

However, Sarah opted to keep her feet on the ground even if she hears so much praises from her fans and from the people who always support her.

After series of questions regarding her post-Valentine movie with John Lloyd, Kris asked Sarah to pick her next leading man after her successful team-up with John Lloyd. "Si Piolo [Pascual]. Ang taas ng pangarap di ba?" Sarah confessed. The popstar princess is, in fact, slated to do a movie with the matinee idol before the end of 2009.

You Changed My Life will open in theaters nationwide starting February 25, 2009.