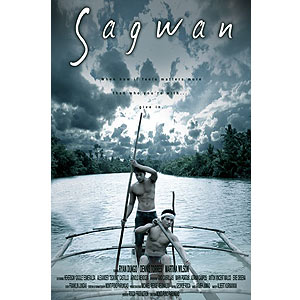 Sagwan is the opening film of the QUEERiosity Manila International Film Festival, which will take place from February 11 to 17 at Robinsons Galleria, Ortigas Center.


The movie Sagwan is set in a quiet town called Tatalon where boatmen make a living ferrying tourists along its long winding river. Behind this scenic setting hides an ugly truth. Boatmen succumb to prostitution to make ends meet. Finding himself at the center of this harsh reality is the main character Alfred, played by newcomer Ryan Dungo.

Alfred prides himself as the only boatman who has not resorted to the sex-for-money arrangement his comrades have grown accustomed to. He is faced with pressure from all sides—from his friend Eman (Dennis Torres) who tries to convince him of the benefits of the "trade," his father whose gambling addiction requires financing, and even from his girlfriend, Cecilia (Martina Wilson) who longs for a more sexually gratifying relationship.


As the movie progresses, Alfred finds a way to give Cecilia what she wants and, at the same time, comes to terms with his confused feelings for Eman. Even the dark specter that haunts his mind is finally laid to rest with a surprising revelation at the end of the movie.

THE VERDICT. Sagwan is definitely a well-made movie everyone should see. Kudos goes to the director, Monti Parungao, who can be considered a master of the scenic setting. He adds his unique touch by applying color manipulation to different scenes to evoke an edgy and modern feel to an otherwise bland provincial location. Viewers will notice a certain polish to the movie and Monti successfully transforms even the gritty, and sometimes dirty, state of tourist spots into something charming and attractive. This feat should clearly become a standard in indie movies where panoramic spots like Tatalon are the usual setting for their stories. All in all, visuals are crisp and clear, giving viewers an impression that they are watching a movie with a decent budget.

Direk Monti also knows how to put up a good show for his audience. He knows who is watching and he aims to please. His close-up shots of the actor's physique left the audience satisfied and even craving for more. The uncut version offers viewers a feast of frontal nudity scenes. But Monti is crafty enough to know that glimpses are more exciting than full frontal. And here, he succeeds once again.

Allowance can be granted to the actors for their neophyte acting skills. Ryan Dungo, despite being the lead, needs more workshops on how to deliver his lines and project credible facial expressions. Surprisingly, Dennis Torres who plays Eman does a better job. His acting is more natural and his line delivery more convincing. His sex appeal is strong and can be felt by the audience.

A welcome addition to the cast are the gay support characters in the movie. Because of them, the movie becomes lighter and more enjoyable to watch. What's more, audiences can relate to them and identify with the various personalities projected onscreen.

As a moviegoer, I fervently wish that indie films forego the usual first- person narration. Sagwan uses the same tired device. Also, the script and storyline are not particularly original. People who have seen the international independent film Ken Park would see clear similarities. But do not let these minor faults prevent you from watching the movie. Sagwan is a good watch and is a definite welcome after the series of disappointing gay indie films that have recently opened in the metro.

Danio Caw is the team publisher of the home and entertainment titles of Summitmedia.

Sagwan is the opening film of the QUEERiosity Manila International Film Festival, which will take place from February 11 to 17 at Robinsons Galleria, Ortigas Center.

Here is the schedule of the films that will have their Philippine premiere in the said filmfest: