When I Met U graded B by Cinema Evaluation Board 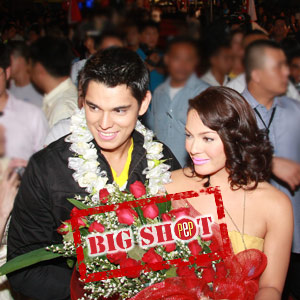 Richard Gutierrez and KC Concepcion thrilled fans who attended the premiere night of When I Met You last February 10, 2009. Two cinema houses of SM Megamall were allotted to invited guests, including the stars of the film and family members of the cast.

Valentine's Day came early for those who attended the premiere night of When I Met U last Tuesday, February 10, at SM Megamall. Red rose petals were thrown in the air as the lead stars, KC Concepcion and Richard Gutierrez, walked down the red carpet area set up in Building A of the mall.

This romantic drama tells the story of two individuals who are unsatisfied with their current partners. Benjie (Richard) is stuck in a relationship with his manipulative girlfriend Tracy (Iya Villania) while Jenny (KC) is in a stable relationship with Albert (Alfred Vargas).

Jenny is looking for that "magic" in a relationship while Benjie wants to connect with someone on a deeper level.

Boasting of story and screenplay by Aloy Adlawan and direction by Joel Lamangan, When I Met U has been graded "B" by the Cinema Evaluation Board. This will entitle the producers to a 50 percent rebate on the film's amusement tax.

Moviegoers were thrilled to watch KC and Richard on the big screen as they acted very naturally in front of the camera for their second movie as love team partners. This romantic film shot in Coron, Palawan and Subic is already being screened in Philippine cinemas as the Valentine offering of GMA Films and Regal Entertainment.

GMA Films president Annette Gozon-Abrogar said that "Richard and KC's chemistry is undeniable" while When I Met U producer Joey Abacan felt that this movie is a good reminder of past Sharon Cuneta and Gabby Concepcion movies. "Joel Lamangan took me back to the time when watching Sharon-Gabby movies was my guilty pleasure-and we now got to produce something of the same caliber and I'm extremely proud of it."


During the premiere night, security personnel protected the two lead stars as they transferred from Cinema 9 and 10 in order to greet their fans and their guests. Outside the cinema houses, fans held up banners depicting their dream projects for their idols. Created by the group Global Kchardees, one tarpaulin showed digitally enhanced photos of KC wearing a Darna costume for the fictional show When Captain Barbell Met Darna. They also held up another tarpaulin requesting for a third movie for KC and Richard.

When KC and Richard entered Cinema 10, they were immediately greeted by fans who eagerly took photos and videos of their idols.

An ecstatic KC told the crowd, "I'd like to thank the Pangilinans, the Concepcions, the Cunetas, the Sottos, and of course, the Gutierrezes for this special, special night. This is definitely something that is very meaningful because, as you all know, isa po siyang ex-deal na akala namin imposibleng mangyayari. This is the second half of the special deal made last year and maraming pong pinagdaanan ang pelikulang ito para mapasaya kayong lahat. We can't believe we're here for the premiere night...buo na po ang pelikula! Thank you to my ABS-CBN family for being so supportive of my film and to GMA-7 also for making this happen."

Richard also gave his own message for the audience: "First, I'd like to thank everyone for being here tonight. I hope the enjoy the movie that we all worked so hard for. We're all going to watch the film for the first time tonight."


Among those who attended the premiere night were the family members of the lead characters. KC's father, Gabby Concepcion, was present but Sharon Cuneta was unable to attend her daughter's premiere night because she was out of town at that time.

Cast members of the film also graced the special occasion, namely Iya Villania, Alfred Vargas, Chariz Solomon (who plays KC's best friend in the film), and Ynez Veneracion (the love interest of Tonton Gutierrez in the film). It is interesting to note that Richard's half-brother, Tonton, was cast as his gambling-addicted father.

Siblings Bubbles and Paolo Paraiso were spotted at the event along with the Madrigal sisters, Michelle and Ehra. Onscreen partners Rhian Ramos and JC de Vera were also seen seated together inside the jampacked Cinema 9. TJ Trinidad attended the star-studded event in support of his fellow Kapuso talents. LaLola star Say Alonzo also arrived at the venue with Valerie "Bangs" Garcia. Other guests that night were Ynna Asistio, Ana Roces, and TV host-columnist Tim Yap.

When I Met U has its own official soundtrack now available in record bars nationwide. The 10-track album contains the theme song of the movie, "When I Met You," performed by KC herself as well as another version with Richard Gutierrez. It also has songs performed by popular bands such as Cueshe ("BMD Bring Me Down"), 6Cyclemind ("Gusto Na Kita") and Itchyworms ("Gusto Ko Lamang Sa Buhay"). The official soundtrack of the movie is released by Sony BMG.