PEP REVIEW: "When I Met U" is the perfect movie date this Valentine! 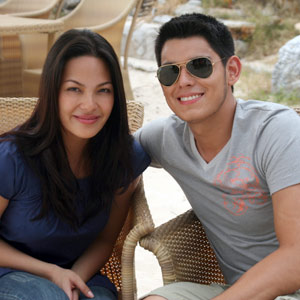 When I Met U, the second movie team-up of KC Concepcion and Richard Gutierrez would make the fans scream for more projects in the future.

So many thoughts were running through my head before watching the movie.

I had no qualms about Richard Gutierrez. I saw his previous Valentine movies—Let The Love Begin, I Will Always Love You, The Promise, My Best friend's Girlfriend—and I was never disappointed. There were minor hiccups in terms of story or editing or acting, but the 25-year-old Kapuso star has this rare gift of creating that instant connection with any lady on screen. Indeed, Richard Gutierrez is the Valentine King of his generation.

I had no reservations either about KC Concepcion's star quality and talent. She's good as she is, and she's bound to be better, as she treats every project that comes her way as a work in progress. The daughter of Megastar Sharon Cuneta is very competitive and is serious about her craft. And she's every leading man's dream leading lady.

My fear before watching the (And it all began...) When I Met U—the story.

I was expecting a mushy movie. The trailer did not divulge anything; it was just a pa-tweetums teaser.

I was expecting the usual plot—a guy meets a girl, they fall in love, conflicts set in, they fall apart, but in the end, they realize they can't live without each other.

I was expecting a film that would capitalize on the beauty of Palawan. Most cinema releases of late flagged the location as one of the movie's attractions.

But all my expectations were set aside the minute I saw Joel Lamangan's name. Oh, I forgot that crucial detail.

One thing I like about Direk Joel is his seamless storytelling. The ace director never exaggerates. I also noted the way he makes the actors become their character. Remember Cogie Domingo in Deathrow or Dennis Trillo in Aishte Imasu 1941?

Hands down, my verdict is: It's a perfect movie date !

1. Storytelling is almost faultless. No dragging parts. No heavy scenes. No mind-boggling ending. The movie has the usual plot, but each major scene is enriched by unusual circumstances.

Second, the first meeting of Benjie and Jenny defies the usual hi-hellos. The guy thinks the lady is late and they argue about it.

Third, their plane lands unexpectedly on a deserted island where the mild friction between them ignites their longing to experience what it is like to be really in love.

Fourth, the intervention of Tracy and Albert when they find out that Benjie and Jenny are seeing each other.

Side note: I initially thought that the movie encourages infidelity, but upon seeing the manipulative attitude of Tracy and Albert, I discarded my impression right away. I still acknowledge the fact that two-timing will never be acceptable in this society, but I also believe that every person has the right to be happy.

Fifth, the major turning point for Jenny—is she going to choose stability over spark?

2. The team-up of KC and Richard is the movie's big come-on. The rest of the elements—including Palawan, where some scenes were shot—are secondary.

Admittedly, I was not totally convinced about their sweetness during the promo. There was something superficial about their body language, parang aral na aral.

But what was shown in the movie was the opposite. There was chemistry and spontaneity. They looked cool as a couple and were very comfortable with each other.

During the early part of the film, I wanted Albert for Jenny because he could give the kind of life every mom would want for her daughter; and Tracy for Benjie because she could play the almost-perfect wife role.

But the kilig moments of Benjie and Jenny prodded me to change my mind. The two looked really good together and so right for each other.

3. The acting was satisfactory.

There were a few scenes when KC's performance level was high compared to Richard's. Side note: It could be her training in theater, where movements and gestures have to be more pronounced.

There were also a few times when I forgot that KC's role was supposed to be not sosyal.

But overall—talking about the timing and conveying the right emotion for the scene—KC was inherently good.

As for Richard, his facial expressions were very apt for the screen. His gaze could make every girl in the cinema swoon. His eyes could readily communicate how he feels. Side note: I was impressed by his reaction when he found out that Tracy deceived him and manipulated the situation.

Iya Villania as Tracy was also good. In the wedding scene of Bubbles Paraiso, who played her friend in the movie, her candid reaction when Richard caught the garter (and KC the bridal bouquet) was a winner. She also gave a good performance during her mild confrontation with KC in the car.

Alfred Vargas did an impressive job as Albert. I liked the way he switched his character from a caring to controlling boyfriend.

As a whole, When I Met You is a perfect movie to watch with your Valentine date. It's breezy, hilarious, and realistically romantic. Most of all, it gave a good definition of love and showed what it is like to be truly in love.

When I left the cinema, I had only one thought balloon—where in the real world can I find that spark and magic?