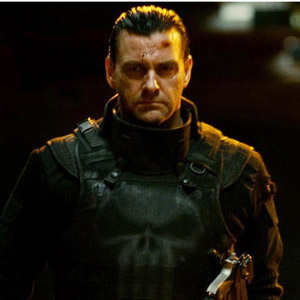 
Waging his one-man war on the world of organized crime, ruthless vigilante-hero Frank Castle a.k.a. The Punisher sets his sights on overeager mob boss Billy Russoti, in Columbia Pictures' and Marvel Studios' new action-thriller Punisher: War Zone. After Russoti is left horribly disfigured by Castle, he sets out for vengeance under his new alias: Jigsaw. With the Punisher Task Force hot on his trail and the FBI unable to take Jigsaw in, Frank must stand up to the formidable army that Jigsaw has recruited before more of his evil deeds go unpunished.

When Frank Castle first appeared as the Punisher in the Marvel comic Amazing Spider-Man #129 in 1974, the character took the comic book world by storm, ushering in a new era of anti-hero. Reflecting the growing moral unease and cynicism of post-modern America in the late 1970s and 1980s, the Punisher complicated the simple dynamics of good versus evil that had previously dominated comic book storytelling for decades. Here was a bloodthirsty ex-Marine driven by rage over the deaths of his family at the hands of the mob, not a superhero, but a mortal man with extraordinary skills and unflagging determination, one who dispenses his own brand of justice—involving murder, torture and violence—to the corrupt.


"The great thing with comic books, especially a comic book like the Punisher series, is that there are so many incarnations of the character," reports producer Gale Anne Hurd. "In this case we had an opportunity to deal with a very dark and violent story. We didn't have to make it light. We could really examine the tortured psyche of Frank Castle."

Punisher: War Zone depicts Frank Castle wrestling with the eternal questions of good and evil and the repercussions of his contradictory moral code. Explains Hurd, "He finds something that he never expected: that in the process of punishing the guilty, he's actually killed an innocent man himself. So during the course of the story, he not only has to wrestle with that, but he has to take on Jigsaw, the most fearsome villain that he's ever encountered, who he had a hand in creating."

"At the same time, this guy is a man's man who is incredibly sad, incredibly scarred," concludes Alexander. "He's very dark and it's very questionable whether he's on the good side or on the bad side. I think that's what really fascinates me because it's not all about action and super powers. It's about this guy and where his soul is."