Jonas Brothers: The Concert Experience to be screened soon in the Phils 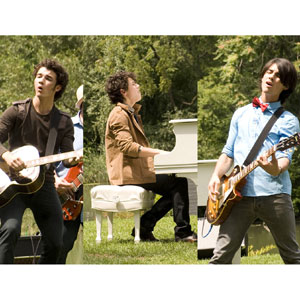 Jonas Brothers: The Concert Experience will be shown soon in regular cinemas across the Philippines as well as in Disney Digital 3D format in SM City North EDSA-The Block and Gateway Cineplex.
The Jonas Brothers hit the big screen in a high-energy Walt Disney Pictures rockumentary feature film event, Jonas Brothers: The Concert Experience. The film blends excerpts from the brothers' red-hot Burning Up concert tour, including guest performances by Demi Lovato and Taylor Swift, with exclusive behind-the-scenes footage, off-the-wall segments, a never-before-heard song ("Love Is on Its Way"), swarming fans and a lot of JB-style humor-giving fans never-before-seen insights into the lives of Kevin, Joe and Nick.

"I think this is a brand-new kind of experience because it's a feature-length rockumentary," Joe says. "People come to our concerts and see it from the audience's point of view, but this movie really makes you feel like you're on stage performing with us. We had multiple cameras running on stage, so it really feels like you're part of the experience."

For the brothers, seeing the 3-D version of the film is a novel experience. As Kevin says, "It was a shock. I had always been on stage during the performance, but to actually see what our performance looked like from outside ourselves was really cool."

"But it's not just the performances that are important," Nick adds. "It's the things we show behind the scenes that really stood out for us and we hope will give our fans a better idea of who we really are."

For fans, that means seeing various facets of each of the brothers. Kevin says: "Nick's the leader type. We call him Mr. President for a reason. He's very precise. He knows what's going on. Joe is comic relief. He's constantly making me laugh, and he's always on top of his game." "And Kevin's the fun one," Joe adds.

The Jonas Brothers' meteoric rise has been nothing less than a pop culture phenomenon. They have been recognized for their impressive talents with several awards as well. They were Grammy®-nominated as Best New Artist in 2008. The same year, they won six Teen Choice Awards, including Summer Song for "Burnin' Up," and and Music Single for "When You Look Me in the Eyes."

"The Jonas Brothers are a phenomenon with their generation," says director Bruce Hendricks. "It's quite extraordinary how talented they are: They write the songs, they're all multi-instrumentalists. They put on an extraordinary show and are very polished. There's almost nothing that they can't do. All of the choreography, the outfits and the look of the stage in the film were designed and created by the Jonas Brothers. But I think the kids can relate to them on a very personal level and admire them as people as much as musicians."

Nick says: "We hope to get the message across that as busy as we are, as much fun as we have, that at the end of the day family's really important to us. You'll see that we really are a family with our band and our crew and everyone who works on this with us, and we want to invite the audience into the family and come have a good time with us on stage and off stage."

The concert movie event of the year, Jonas Brothers: The Concert Experience will be shown soon in regular cinemas across the Philippines, as well as in Disney Digital 3D format in SM City North EDSA-The Block and Gateway Cineplex.
Read Next
Read More Stories About
movies
Post a Comment
Featured
Latest Stories
Trending in Summit Media Network