Isla Fisher lives for fashion in Confessions of a Shopaholic 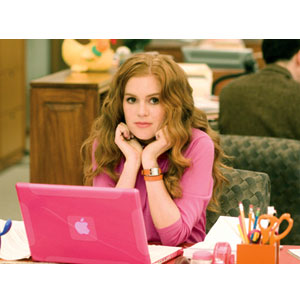 Isla Fisher admits that she can relate to her character, Rebecca Bloomwood's enthusiasm for shopping. "I'm a bags and shoe girl. I have so many shoes, it's terrifying," says the lead actress of Confessions of a Shopaholic.
The filmmakers of Touchstone Pictures' romantic comedy Confessions of a Shopaholic knew that the lead character in had to be portrayed by a special and spirited talent. So they tapped emerging major talent Isla Fisher for the role.

"She stole people's hearts in Wedding Crashers," says producer Jerry Bruckheimer. "In Confessions of a Shopaholic she carries the movie. It's exciting to see her wit, intelligence and comedic timing in nearly every scene."

Based on Sophie Kinsella's international bestseller, Shopaholic revolves around Rebecca Bloomwood (Fisher) is a fun-loving girl who is really good at shopping-a little too well, perhaps. She dreams of working for her favorite fashion magazine, but can't quite get her foot in the door—until ironically, she snags a job as an advice columnist for a financial magazine published by the same company. As her dreams are finally coming true, she goes to ever more hilarious and extreme efforts to keep her past from ruining her future.

"I thought that Isla would be perfect for the part," notes director P.J. Hogan. "This role needed someone who was immensely likeable and also very gifted dramatically. And importantly, Isla is a physically gifted comedienne. She's that rarity, a beautiful woman who isn't afraid to make a total fool of herself. She's fearless, which is what the character needed."

Author and associate producer Sophie Kinsella agrees. "Isla's fantastic. She's funny, she's warm, she's appealing and she's the kind of girl that you would just long to be your best friend."

Likewise, Fisher was a fan of Kinsella's Shopaholic series long before she was approached to play Rebecca Bloomwood. "I read all of the books when I was working in London," she says. "People refer to the books as ‘Chick Lit,' but I think the more appropriate term is ‘Wit Lit' because they are genuinely funny. I felt that the book really spoke to me; I was truly blessed to get this role.

"Rebecca is such a great character," Fisher continues. "She's lovely, optimistic, happy, a good girl who is also an impulsive shopper who falls in love with shiny objects. She has this childlike lust for new things. Becky is so warm, loveable and deeply flawed, and she has tapped into the collective consumer consciousness."

Fisher admits that she can relate to her character's enthusiasm for shopping. "I'm a bags and shoe girl," she says. "I have so many shoes, it's terrifying."