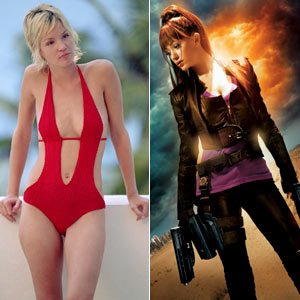 Ashley Scott plays it tough in the reality-based action movie 12 Rounds opposite wrestling star John Cena. The movie explodes when Fisher (Cena) apprehended Jackson (Aidan Gillen), a notorious criminal mastermind whose girlfriend was accidentally killed during the arrest. Jackson escaped and he's out for revenge. Fisher soon learns that his fiancée, Molly (Ashley Scott) was kidnapped by Jackson. He is forced into a series of carefully plotted traps—surviving all 12 is the only way he can get her back. Scott's television credits include Dark Angel, Birds of Prey and Jericho. She was recently seen in the gripping thriller Into the Blue with Jessica Alba and Paul Walker.

Dragonball Evolution boasts of feisty rising young stars Emmy Rossum (The Day After Tomorrow) as Bulma, a beautiful woman intent on retrieving the mystical Dragonballs for her own reasons and Jamie Chung (Samurai Girl) as Chi Chi, a young martial artist engulfed in the adventures of Goku. Based on the worldwide phenomenon manga television series, Dragonball Evolution takes on the adventures of the heroic Goku (Justin Chatwin), a powerful warrior who protects the Earth from an endless stream of rogues bent on dominating the Universe and controlling the mystical objects from which the film takes its name.

Emmy Rossum began her theatrical career at the age 7 when she was chosen to join the Metropolitan Opera in New York as a member of the Children's Chorus. She recently appeared in Clint Eastwood's Mystic River and in the chart-topping films The Day After Tomorrow and Poseidon. Jamie Chung, on the other hand, is a Korean/American actress who was born and raised in America where she attended college and appeared on MTV's The Real World. She went onto appear in many TV shows, including ER, Veronica Mars, Days of our Lives and CSI: New York. Her film roles include Rush Hour 3 and I Now Pronounce You Chuck and Larry.

Leading up to the events of X-MEN, X-Men Origins: Wolverine, Lynn Collins suits up as Silver Fox, Wolverine's (Hugh Jackman) love interest whom he shares an epically violent romantic past. In Marvel Comics history, Silver Fox was a former love of Wolverine, and the pair lived together in the Canadian wilderness during the late-1900s before a series of tragic events pushed their lives in dramatically different directions. Asked by MTV on how she prepared for the role of Silver Fox, Collins said her male counterparts had a far rougher time. "They were all on super-buff diets, and I had pizza most of the time," said Collins. "They were so jealous of me. "I didn't have to beef up in this movie," she added. "I just had to wear skimpy clothes."

A gem of a mutant who is also seen in the smashing hit movie trailer of X-Men Origins: Wolverine playing worldwide is Australian model Tahyna Tozzi who plays Emma Frost a.k.a. The White Queen. Her role possesses the ability to turn into diamond. Tozzi is also a singer and an actress in her native town where she is best known as Perri, a cast member of the popular teen TV show Blue Water High about a school with a special course in surfing.