John Lloyd Cruz was afraid to shoot You Changed My Life 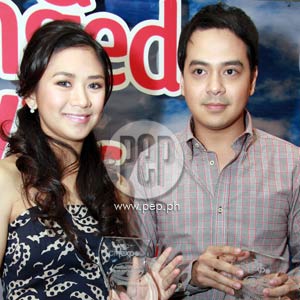 Sarah Geronimo and John Lloyd Cruz show off the glass trophies that they received for being named as the Box Office King and Queen of 2008, according to SM Cinema. The two will again be paired in You Changed My Life, which will open in cinemas nationwide starting February 25, 2009.


John Lloyd Cruz admitted that he was initially hesitant to create a sequel to the movie A Very Special Love because of its tremendous success.This romantic comedy proved to be such a big hit among viewers with its P178 million gross, according to Star Cinema.

Because of this feat, JLC and Sarah Geronimo were named the Box Office King and Queen according to SM Cinema. In addition, SM Cinema also chose Star Cinema, ABS-CBN's film arm, as the 2008 Top Grosser Local Film Producer in the country.


Sarah and John Lloyd are hoping lightning will strike twice as they promote their second movie together titled You Changed My Life. The two stars are hoping that the sequel of AVSL will become just as entertaining as the first film that popularized the "sun dance."

But since they decided to accept the challenge of starring in You Changed My Life, the lead characters maintained that they gave their best effort to offer something new to viewers who have waited patiently for the follow-up of AVSL.

How did they change each other's life after working on two movies together? John Lloyd pointed out that the Popstar Princess has a very positive effect on him. "After I got to know Sarah sa A Very Special Love at makasama ko siya uli sa You Changed My Life, parang may lumabas na ibang ako.

This romance movie will be screened in Los Angeles by February 28 and in San Francisco by March 1.


SYNOPSIS. It has been six months since Laida Magtalas (Sarah Geronimo) has won the heart of her boss Miggy Montenegro (John Lloyd Cruz). Since then, her life has been nothing but roses-she got promoted and so did her boyfriend Miggy.

Meanwhile, Miggy also feels like he is on top of the world since he has patched things up with his family members, especially his older brother (portrayed by Rowell Santiago). For the first time, Miggy is in a meaningful relationship that will prove to everyone that he is indeed, a work-in-progress.

But things change when their increasing workload separate the two lovers. Miggy gets promoted but he is assigned to Laguna. Meanwhile, Laida is being offered a job in Canada. With their careers leading Miggy and Laida in opposite directions, their relationship eventually suffers from the pressures of being apart.

Another complication arises when the character of Rayver Cruz makes his presence felt in the life of Laida.

Will Miggy and Laida be able to end up happily every after? Or will they realize that living their dream is actually harder than attaining it?


PEP PROMO. Lucky PEPsters located in Manila will get the chance to win two (2) tickets to You Changed My Life. Click HERE to answer the question and join the online promo. Deadline of submission of entries is on March 6, 2009.