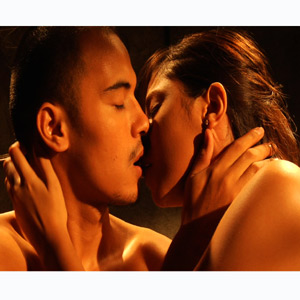 Jay Aquitania shaved his head to suit his role as a pedicab driver in Padyak. This indie film will be screened in Robinsons Galleria IndieSine starting March 4, 2009.
Man kicks his way through life. This is the premise of Padyak, the new indie film from Breaking The Box Productions. This is written, produced, and directed by Aloy Adlawan, the same man who has crafted characters like Polo Ravales' Roomboy in the 2005 Cinemalaya Film Festival and Coco Martin's security guard in Condo. This time around, he introduces Noel, the pedicab driver played by Jay Aquitania.

"I shaved my head," says Jay Aquitania. "It was a good way of easing into the role." This came out during a discussion as to how he would 'look' in the movie after Aquitania's portrayal as a closet homosexual in Roxxxane and his Japanese speaking character in Cinemalaya's Concerto. "Kuya Aloy asked if I could be in skin head. But he wasn't sure about it yet as he couldn't imagine how I would look with a shaved head. So he left the decision to me."

On the first day of shoot, Aquitania arrived on the set with a shaved head and Adlawan didn't recognize him. "It took me a moment to realize it was Jay," claims Adlawan. "Then I realized this was going to be great. He very much looked like the part already and he wasn't even driving his pedicab yet. The rest was just easy for Jay. He eased into Noel's character as comfortable as wearing his favorite shirt. He would play around with his pedicab on the set like it was really his thing."

Padyak uses the pedicab vehicle as a visual symbol to his theme running around the cycle of life and Adlawan's fascination with existential exploration. The pedicab is one of the country's unique form of transportation, second only to the jeepney. It uses pure human energy to transport passengers. No gas. No pollution. No global warming guilt.

In July of 2008, the screenplay was given a P500,000 grant from the National Commission for Culture and the Arts. Then it won third place at the 2008 Don Carlos Palanca Memorial Awards for literature in the screenplay category.

Padyak is showing on March 4, 2009 exclusively at the Robinsons Galleria IndieSine. It will be screened in other theaters after its IndieSine stint.


SYNOPSIS. Noel inherits the pedicab vehicle after the sudden death of his father, a pedicab driver. Unable to pursue his dream of going to college, he takes up the job his father left. Everything and everyday then become a cycle of routine with people he knows and the perfect strangers he takes into his vehicle to pedal them to their destinations.

In the middle of Noel's story come three other vignettes that are totally unrelated to him. Or so it seems. A maid has an affair with her employer's lover and is caught. A child wants to throw his father a birthday bash. A law graduate literally encounters another side of himself tempting him to do something.

A series of tragedy takes Noel's life into its own spin. A beautiful woman he befriends was found dead, his best friend Baste is killed, there's the tragedy of the woman he loves, Nadia, falling into the claws of prostitution, and lastly, his own mother succumbing into a diabetic coma. Noel is left questioning his own existence...Does his life really matter? Will the world be a different place without a pedicab driver like him?