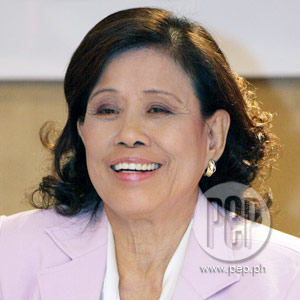 
Lily Monteverde, or more popularly known as Mother Lily, has been in the business for more than three decades now. And if you ask her about the secret formula to being a successful film producer, she would say "you have to be a movie fan."

This, she again stressed during SM Cinema Cinexpo—held last February 17-18 at SMX Convention Center, SM Mall of Asia Complex, Pasay City—where she was invited to deliver the opening remarks.

In her speech, she reminisced the pre-producer period of her life, "I spent my childhood just watching movies. I remember spending nine straight hours in the theatre with only a sandwich as my baon. Even the payment for my school bus, I used to buy tickets for the movies."

Her interest became a vision.

The young girl who used to go to Luneta to watch the shooting of Nida Blanca and Nestor de Villa made, or go to Sampaguita Studios "only to be snubbed by the movie stars and whisked away by the guards" grew up to become one of the most powerful film producers.

But she admitted that once, she also entertained thoughts of becoming an actress. "I would go in front of the mirror and see if I can compete with the mestiza actresses of our time."

MOTHER LILY'S MAGIC FORMULA. The matriarch of the 48-year-old Regal Films gave three "important lessons that we should learn and practice" to improve the quality of the local movies.

She summed up her magic formula in three words: Struggle, sacrifice, survive.Here's the excerpt of her speech:

"Number one. Struggle through the changes—together. With the changes in film technology, film trends, film cost and even film distribution possibilities, we should unite and start seeing each other not as competitors but co-workers in this industry. We should help each other in lobbying for lower film taxes, sharing the technology in improving the delivery of services to our valued audiences.

"Second, sacrifice—and practice simple lifestyle. With the global financial crisis, we should avoid extravagant spending just so we could give in to the whims of certain stars and other seemingly powerful forces in the industry. We should unite and do our share of cutting cost and practicing simple lifestyle especially in our local filmmaking—without sacrificing quality. Truly, a creative and empowered team can always come up with artistic and cost efficient alternatives.

"And lastly, survive—and keep the level of excellence. We in Regal have honoured tradition and have been in the history of Philippine movies because we have made it a point to work and invest on the film masters like Brocka, Bernal, De Leon to Chito Rono, Maryo J. Delos Reyes, Joey Reyes and Joel Lamangan, among many others.


"But at the same time, we should always be in the look out for good stories, good actors and good directors..."

The 69-year-old film producer ended her speech with a promise: "As I am born a movie fan, I will remain a movie fan, and I will die a movie fan. Habang may mga Pilipino na gusting manood ng pelikula, your Mother Lily will always be here for you!"