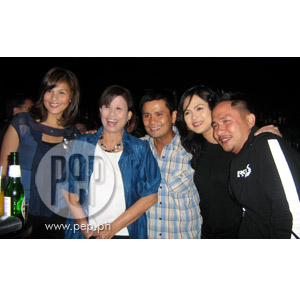 
Last week, the staff of Panoramanila Pictures Co. distributed invites to members of the press showing a photo of the Oscar trophy and the words "Ploning Foundation" decorated with two lychees.

The golden trophy in the invite refers to the Oscar bid of Ploning as the Best Foreign Film representative of the Philippines to the 81st Academy Awards. Unfortunately, it was not able to enter the Top 9 entries chosen worldwide.

On the hand, the lychees are significant to the plot of the film because the canned fruit is considered special food in Cuyo, Palawan—the place where the film was shot entirely.

They also wish that the FAP will choose the Philippine representative at a much earlier time. "Sana mas maaga pipiliin, yun yung pinakiusap namin sa FAP then middle of the year, nagsisimula nang mag-plan at maka-book na ng theaters.

JUDAY CRIED OVER PLONING'S LOSS. Did Judy Ann feel hurt or disappointed that Ploning did not enter the Top 9?

The ABS-CBN star pointed out that through their efforts, they were able to introduce Philippine cinema to a lot of foreigners that they met during their Oscar campaign.

Judy Ann also mentioned that if their film Ploning made it to the Top 9, they would have created another fundraising that would ask people: "Ano ang susuotin ni Ploning sa Oscars?"


BYE PLONING, HELLO DARLING. Speaking of looks, the actress arrived at the event with a new hairstyle that is wavy instead of her usual straight black. Why is she sporting curly hair now? Is it in preparation of upcoming wedding to fiancé Ryan Agoncillo?

"Hindi, gusto ko lang maiba yung itsura ko kasi parang time na rin to move on from Ploning di ba? I've been doing Ploning for the past year, eto na ‘to, goodbye to and farewell to Ploning and hello to the Ploning Foundation! And hello to Darling!"

(Click HERE to read more about the wedding plans of Judy and Ryan.)


According to Direk Dante, Darling will be the name of her character in his upcoming comedy film to be produced by Regal Entertainment. The film is conceptualized by Asia's Songbird Regine Velasquez and it will be topbilled by no less than her boyfriend, Ogie Alcasid.

Ga, a long-time friend and the stylist of Juday for the past 16 years, says that he wants this comedy film to show how fun it is when friends collaborate on a movie together.

PEP spotted GMA-7 documentarist and I-Witness host Howie Severino that night at Dolce Bar and he mentioned that this upcoming drama-comedy film, to be produced by Panoramanila, is based on war veterans residing in Powell Street in San Francisco, U.S.A.