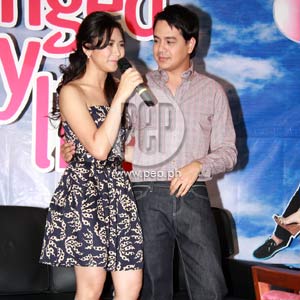 
Six months have passed since Laida Magtalas and Miggy Montenegro became a couple in A Very Special Love. In the sequel titled You Changed My Life, Star Cinema picks up where they left off and shows how the two characters have grown since they became committed to each other.

In the trailer of You Changed My Life, Laida (Sarah Geronimo) is rushing to meet her boyfriend Miggy (John Lloyd Cruz). Her mother reminds her to slow down a bit by saying, "Dahan-dahan lang, pakipot ka naman ng konti!"

At the start of the film, Miggy tends to spoil his new girlfriend but somewhere along the way, he becomes too caught up with his work to spend time with her. Meanwhile, Laida is tempted by a new job opportunity that will take her abroad. She also catches the attention of her childhood friend Mcoy (played by Rayver Cruz).

How will the couple surpass all these challenges in You Changed My Life?

During the press conference of the Star Cinema film, John Lloyd and Sarah pointed how their characters have grown since they portrayed them in the first film AVSL.


WHY THE WIG? Just like in AVSL, Sarah will also be seen sporting a wig for her role as Laida. Why is there a need for the TV host-singer to wear a wig in the two movies? "We normally want our actors to be seen in the movie other than their personal selves. And one way to do is to change the personality, if it requires a wig, why not? Nung nagka-wig si Sarah, parang hindi na siya si Sarah, si Laida Magtalas na siya. Binabagay po namin ang personalidad ng artista sa role na gagampanan niya," explains director Cathy Garcia-Molina, who also helmed AVSL.


Continue reading below ↓
You Changed My Life will have its star-studded premiere tonight, February 24, at SM Megamall. Its international screenings are scheduled on February 28 at Los Angeles, California and on March 1 at San Francisco, California. This Star Cinema-Viva Films co-production will open in cinemas nationwide starting tomorrow, February 25, 2009.

PEP PROMO. Lucky PEPsters located in Manila will get the chance to win two (2) tickets to You Changed My Life. Click HERE to answer the question and join the online promo. Deadline of submission of entries is on March 6, 2009.