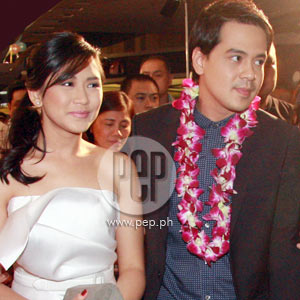 Sarah Geronimo, shown here wearing a Rajo Laurel creation, graced the premiere of You Changed My Life last night, February 22, at SM Megamall. Her leading man John Lloyd Cruz assisted her as they made their way through the thick crowd.


Given that You Changed My Life is graded A by the Cinema Evaluation Board and based on the good feedback gathered from those who watched the premiere of You Changed My Life, it seems that the stars, the director and the staff members succeeded in exceeding the expectations of viewers who simply want to be entertained with a feel-good romantic movie.


Last night, February 22, the escalators of SM Megamall leading to Cinema 10 of SM Megamall were blocked to prevent people from overcrowding the hallways during the premiere night of You Changed My Life.

By the time the romantic movie started screening, Cinema 10 was already filled to the max as fans of John Lloyd Cruz and Sarah Geronimo opted to stand and fill the aisles as they watched the sequel of A Very Special Love.

Right after the premiere of the movie, the stars and staff members of the Star Cinema film proceeded to Pasto, El Pueblo, to have their thanksgiving party. During the event, PEP (Philippine Entertainment Portal) was able to chat with Rowell Santiago, who played Art, the older brother of John Lloyd in the film.

"Si Lloydie, no doubt, he is one of the best young actors of today...Every time siyang gumawa ng isang eksena, totoong totoo. So both of them look good together onscreen, kahit they're not really in love, you feel that they're both in love, di ba? Siguro malaking ano dyan is yung director talaga. Cathy brought out the best in both of them," observes Rowell.


PEP asked director Cathy Garcia-Molina to explain how she managed to show how in love their characters were even though they were not a couple in real life.

Direk Cathy megged previous films of Bea and John Lloyd such as One More Chance (2007) and Close to You (2006).


PEP took the opportunity to ask John Lloyd how he managed to show that he was completely in love with Sarah even though he is committed to his girlfriend Liz Uy.

"That's the beauty in doing a film, you get to portray a certain story, a certain relationship," he points out. "Kung hindi mo maipo-portray, then there would be no movie-making at all. So we're blessed that we're being effective. Alam mo yun, yung portrayal coming into life or has come into life, masaya kasi you can make people believe."

Will there be a part 3 for the love story of Laida Magtalas and Miggy Montenegro? "As I always say depende sa management...kung gusto pa nila, depende sa clamor ng fans, e. If they want a part 3 then I think management will adjust kung may gusto pa sila."

What kind of feedback did she receive regarding You Changed My Life? "Sana sila [John Lloyd and Sarah] na sa totoong buhay," she says with a laugh. "Sabi ko sa part 3 ikakasal ko na sila!"