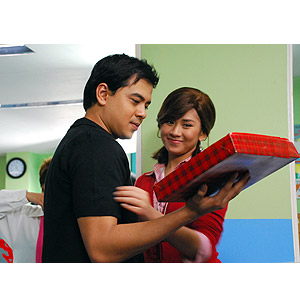 Love knows no hurdles. In this scene, Laida Magtalas (Sarah Geronimo) travels from Manila to Laguna to surprise her boyfriend Migs Montenegro (John Lloyd Cruz) and celebrates Valentine's Day with him. You Changed My Life received grade "A" from the Cinema Evaluation Board (CEB).

Everyone's biggest question on the night of You Changed My Life premiere: Will the sequel match, if not surpass, the feat of the first John Lloyd Cruz-Sarah Geronimo starrer?

Fans were filled with anticipation. Critics were wielding pressure.

But I entered the cinema without any expectation.

I just want to watch and possibly enjoy the film. Period. I do not want to spare even a few minutes comparing You Changed My Life with A Very Special Love. For me, a film sequel has usually been a class on its own—either it's good or not so good, not necessarily better or worse than the first.

The fans of the Pop Princess clapped their hands when the film began rolling. About four or five voices screamed, "We love you, Sarah!!!"

But 20 minutes later, I found myself chuckling and laughing with the crowd. After an hour, I noticed that almost everyone in the moviehouse seemed motionless, their eyes glued to the screen. And after the final scene came a round of applause.

I have two words for the movie: Entertaining and engaging!

And several reasons why it's a movie to beat:

(1) The story-telling is flawless. Not a single scene out of place from start to finish.

It begins with the brisk narration of Laida Magtalas (Sarah) about the milestones in her relationship with Migs Montenegro (John Lloyd).

She is an editorial assistant turned account executive of Bachelor magazine, where she met Migs, and she comes from a simple family. He belongs to a rich clan, but he has yet to prove his worth to his half-siblings.

They make a nakakakilig pair. They come to work together. They call each other several times a day, even if one of them is in the middle of a pitch or a meeting. They go home together.

At first, it's sweet and cute, but the "clingy" approach takes its toll on their relationship when Migs is assigned to head the operations of their laundry-cleaning factory in Laguna.

Suddenly their time together becomes so scarce that even sending a text message or picking up a call seem impossible tasks for Migs. They try to adjust to the new set-up—to the point of waking up early or sleeping inside the car. Eventually, the lack of time and their immaturity lead to their split.

Macoy (Rayver Cruz) is an interesting diversion in the story. He is Laida's kababata, who serves as her tagahintay, tagasundo, tagahatid. He is not a contravida here, but more of a catalyst—he makes Migs jealous, and towards the end, makes Laida realize one important thing about love.

The film shows everything about relationships—from the sun-shiny days to the turbulent stage to the storm's aftermath.

The story is more mature, but not too serious; romantic but not sappy; predictable yet realistic; and pretty comprehensive yet snappy.

In A Very Special Love, there was the sun dance. This time, she introduces the power hug.

A dance showdown between Migs and Macoy takes the place of the videoke scene in the last movie.

A helicopter ride, fireworks display, heart-shaped balloons, strawberry-filled cakes, Behbeh ring tones are some of the few nakakakilig visual and audio treats of the movie.

The Star Cinema director knows exactly when to infuse wit or hilarity or magic into a scene. She turns something ridiculous into ridiculously funny. She explores situations and goes beyond borders.

Her treatment is effective in conveying the mood and message of each scene; there's proper build-up every time the tone changes; transition is smooth and well-paced.

(3) Sarah Geronimo proves she has that leading-lady charm.

First, her team-up with John Lloyd was tested and, obviously, it worked. In You Changed My Life, she was given a few scenes with Rayver, and sparks really flew.

Sarah's spontaneity and artlessness have that effect of letting another person's guard down. Take her tandem with Rayver as an example—in his previous movies, I sensed a tiny bit of reticence. But with Sarah, it seemed like he dropped his inhibitions.

As an actress, she's fairly good, considering that it's only her fourth movie. She showed minimal tendency to overdo her delivery or facial expressions, but that's only in about two or three scenes, so I doubt if the viewers even noticed it.

One trivial detail I noted though at the onset of the film: He looked a bit haggard. But I dropped that as a minor concern the minute his dad (Dante Rivero) asked him to handle their family business in Laguna. The job was truly taxing!

(5) The John Lloyd-Sarah tandem once again raises the kilig bars in cinemas, and does it effortlessly.

Some of their lines are so "scripted" that in real life you'd take them as pambobola,or even corny. But there's something so romantically cute about the way they did the exchanges.

(6) I like how the other cast members liven up most situations.

Matet de Leon is her usual prangka character. Joross Gamboa and Gio Alvarez, who usually make a bet on how far Laida's relationship with Migs would go, are the alaskadors in the movie.

Rowell Santiago (Migs's brother) is still a formidable force in Migs's life, but he mellows in the latter part of the movie. The cool twist to his story is the entry of Mikee Cojuangco (ex-girlfriend of Rowell's character).

Most of all, I'm happy with the ending. Hindi bitin. Hindi pilit. Hindi alanganin.

Don't expect the movie to have any long-term impact in your life. Its goal is simple: pakiligin at aliwin ang manonood, and it is successful in doing exactly that.

I entered the cinema without any question in mind but I left with, "May part three kaya?"