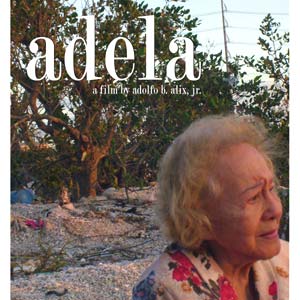 The Anita Linda-starrer Adela bagged all eight awards of the 19th Annual Circle Citations for Distinguished Achievement in Film for 2008 conferred by the Young Critics Circle.
The Film Desk of the Young Critics Circle formally bares its choices for distinguished achievement in films of the past year. Adolfo Alix Jr.'s Adela made a clean sweep of all the honors for all the categories of the annual awards.

The awarding ceremony combined with a forum is slated on Wednesday, March 11, at 2 o'clock in the afternoon at the Pulungang Recto of the University of the Philippines Faculty Center in Diliman, Quezon City.

The gritty dumpsite drama of a grandma awaiting a visit from immediate family members on her 80th birthday was voted Best Film of the Year and conferred recognition for Best Screenplay, Best Cinematography and Visual Design, Best Film Editing, Best Sound and Aural Orchestration and Best Performance for veteran actress Anita Linda in the title role.

Established in 1990, YCC is the academe-based critics group with members coming from various disciplines. Through the years, they have become attentive observers of Philippine cinema constantly bringing into the analysis of film an interdisciplinary approach.

The organization departs from many conventions of other award-giving bodies both here and abroad in bestowing cinematic honors. For instance, the award for Best Film of the Year is reserved for the director such that no separate prize for direction is needed. The Best Performance award is most coveted as it is conferred on a screen performer whether male or female, adult or child, individual or as part of an ensemble, in leading or supporting role. To uphold a more dynamic and encompassing way of looking at films, technical honors refer to fusion of outstanding efforts in fields otherwise deemed apart. In this case, the Best Cinematography and Visual Design recognition covers both camerawork and art direction. Similarly, Best Sound and Aural Orchestration encompasses not just sound engineering per se but musical score as well.

Adela's clean sweep of YCC awards is the third time for a film to achieve such honor after Masahista (2005) and Inang Yaya (2006). It won over the only other nominee—Brillante Mendoza's Serbis—in the topmost category. Joining Serbis is Yanggaw in the roster of nominations for all the three technical categories while nods for Best Screenplay also counted Imoral—another Alix megger written by Gerry Gracio—aside from Serbis as scripted by Armando Lao.

Veteran actress Anita Linda bested nominees in the singular acting category that shows her to be the only female. Said nominees are Paolo Paraiso in Imoral, Ronnie Lazaro in Yanggaw and Carlo Aquino in Baler. Adela's victory also marks the second time for a digital feature to clinch the Best Cinematography and Visual Design prize after Death in the Land of Encantos (2007).

In picking Adela for top honors, YCC cited the film's departure from the usual "catastrophic and sensational depiction of poverty." Impoverishment is reckoned in terms not only of "economics but also of emotion and imagination." The here-and-the-now "small sufferings of a senior citizen" living independently are set against "the backdrop of the greater suffering of a nation" plagued by corruption scandals in high places and a social system that generally neglects the welfare of constituents in the margins of society.


Here is the complete list of winners and nominees for this year's YCC film awards:

19th Annual Circle Citations for Distinguished Achievement in Film for 2008


Best Film of the Year


Best Performance by Male or Female, Adult or Child, Individual or Ensemble in Leading or Supporting Role

Ronnie Lazaro in Yanggaw (Cinema One)

Noel Ferrer is on leave as a YCC member and he inhibited himself from voting in the Young Critics Circle ever since he joined GMA Films.

YCC drew its selection from both regular and non-regular releases comprising the entirety of Philippine cinema output in 2008. Some titles had to be dropped out of consideration if they failed to have a total of three or more screenings before a paying or non-paying audience in any one or more public venues; or if they had already qualified for consideration in the previous year.